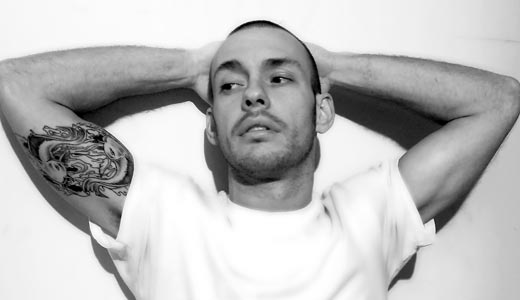 One of Nacirema's many raps includes one about a half-glass of water.PHOTO FURNISHED

Hudson, aka Nacirema, whose new album The Jesus Piece is out now, keeps his beats close and his abstractions closer. Rhyming since high school, he fell under the wing of an Indianapolis rapper named Osiris, who mentored him on what Hudson calls the “tactical art” of rhyming.

“One day we were at this party in Radcliff, and he started battling me, so I battled back,” Hudson says. “At the end, he have me a hug, and I never saw him again.

“A lot of people rap about their lives, but my life is rhyming,” says Hudson, now 32. He wrote 2006’s Wars In Wonderland after being laid off, locking himself in his apartment for a month. The experience solidified his dual role as producer and rapper, and he’s efficient and direct in the studio.

“He’s extremely particular — I won’t lie about that. I submitted 10 beats to get a track on that album,” says Brian Graham, Nacirema’s drummer, producer and founder of Fat Man Music, which is releasing The Jesus Piece. “He’s such an unsung hero in hip hop to me.”

Keith Rager wrote beats for two tracks on Jesus, “Thunder Town” and “Ginseng,” at Pro Sound Underground, a studio he built with his parents, who own Pro Sound Music Shop in Clarksville.

“Nacirema gets that itch,” says Rager, who sampled Japanese funk for “Ginseng.” “Me and Christian are pretty close now. I’ve already gotten to the point to where I can read him. I can tell if he likes a beat within 10 seconds every single time.”

The Jesus Piece isn’t religious, more a profession of voice and words as instruments unto themselves, he says. “When I speak, it’s my ‘Jesus piece.’”

Live, Nacirema’s been known to close the distance between him and the audience quite literally, and has stopped shows mid-sentence to thaw out the crowd. “I have to have a cordless microphone,” he says. “I’m not confrontational. It’s about sharing. ‘This is what I do. Now you know why I do what I do.’”

These days, Nacirema’s biggest job is also his biggest motivator, his 4-year-old daughter Nevaeh (heaven backward): “She makes me want the music to be more credible.”

And that means stepping on the treadmill. Although Nacirema says he’s learning to take promotion of his albums more seriously, this past Sunday, he was already back at Rager’s studio working up new songs.