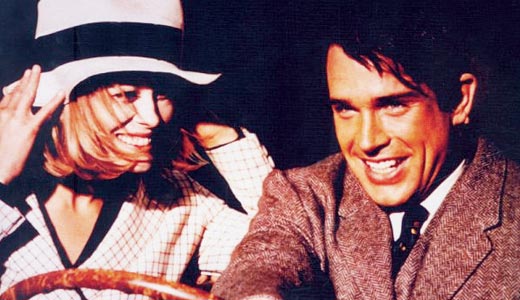 1968. Can there be anything new to say about that evocative year? Mark Harris’s intelligent, addictive book, “Pictures at a Revolution,” proves there is. He examines five very different Best Picture nominees that encapsulated a moment of political strife and cultural flowering: “Bonnie and Clyde,” “In the Heat of the Night,” “The Graduate,” “Guess Who’s Coming to Dinner” and “Dr. Dolittle.”

Harris, an arts reporter and critic, charts the inception, making and reception of these films while deftly teasing out what was happening to the film industry — as well as the country at large — in that decade.

Ranging from pat to path-breaking, the movies serve as a lens on the period. Though several of the films, especially “Bonnie and Clyde” and “The Graduate,” came to be touchstones, they were conceived years before the decade became a symbol of cultural change.

“Bonnie and Clyde” combined techniques of the French New Wave with a uniquely American sensibility, producing a film that was raw and morally ambiguous, alternating between screwball humor and extreme violence. “The Graduate” captured a form of contemporary alienation, “the generation gap” itself, both mocking upper-middle-class aspirations and refusing to model an alternative way of living.

Both movies were made outside typical studio channels and featured actors who were then largely unknown. They were made because of the visionary passions of their directors, writers and producers, all of whom were operating against the conventional wisdom of moviemaking. This sense of urgency and purpose is visible on screen.

Sidney Poitier figures prominently in the story, with leading roles in “Guess Who’s Coming to Dinner” and “In the Heat of the Night,” and a small role, later cancelled, in “Dr. Dolittle.” Poitier serves as the book’s moral center. Though he appeared in the films that Harris finds to be some of the least dynamic specimens of the group, Poitier cut a singular and complex figure in the formulaic studio system. He was the first African-American leading man and a major box-office draw, appealing to white and black movie audiences, but his appeal was based on his exceptionalism.

As the 1960s waned, he grew tired of the position. The two nominated films that featured Poitier show how he functioned in a changing Hollywood. “Heat” combined aspects of the old Hollywood message movie with intense, Method-influenced performances by Rod Steiger and Poitier. The film, in Harris’s telling, sits on the border between the old system and the new. “Guess Who’s Coming To Dinner,” while straining for contemporary relevance with its theme of interracial marriage, was, in reality, a nostalgia trip for one of the industry’s great onscreen pairs, Katharine Hepburn and Spencer Tracy.

Harris moves nimbly among first-person interviews, archival materials and criticism from the period, combined with his own lucid interpretations. The result is an intelligent page-turner. The sections on the “bloated” “Dr. Dolittle” drag a bit, but they serve to illustrate exactly what ailed the studios. Wildly expensive and overly long, made more for profit than out of a sense of purpose, the film signaled the waning of big studio musicals and initiated a period of soul searching by the industry. Twentieth-Century Fox essentially bought “Dolittle”’s nomination with free dinner and champagne. The ploy didn’t work. The movie was a commercial failure.

While Harris tells an inspiring David and Goliath story, he notes in the final chapter, “the success of the pictures in the class of 1967 focused Hollywood’s attention on a new generation of moviemakers and moviegoers and heralded what is now seen as a second golden age of studio moviemaking that lasted roughly until the late 1970s.”

While this second golden age deserves to be lauded and examined, it too would not last. Or, as Harris writes, “Old Hollywood — the Hollywood of producer- and studio-driven product intended for the widest possible audience — didn’t disappear; it simply reinvented itself.”

If melodramas and gaudy musicals have faded, romantic comedies and summer blockbusters have replaced them. The audience for serious film today seems as small as it was in 1965.