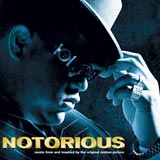 I have mixed feelings on watching the biopic of the late Notorious B.I.G., which I will not go into here. Here, we look at the 17 songs chosen by label and movie producer Diddy to grace the film’s retail soundtrack. Of these, only seven are some level of “unreleased,” with the others chosen from his two proper albums, thankfully ignoring his posthumous albums.

Two of these are new songs by B.I.G. friends and collaborators Jadakiss and Jay-Z. Jay-Z has the ridiculous “Brooklyn Go Hard” featuring Santogold, and I dare you not to get whiplash the first time you hear this in your car. Jadakiss joins up with B.I.G.’s widow Faith Evans for “A Letter to B.I.G.,” a simple but pleasant conversation to catch up with a lost friend.

The last three cuts are unreleased demos from the man himself, before Bad Boy and fame, and serve to remind of the initial promise we all heard in the summer of 1993. Overall, the listen is uneven, with odd song choices — “Notorious Thugs,” “The World is Filled” and the pointless karaoke of C.J. Wallace, his son, on “One More Chance (Legacy Remix)” — making this disc inessential.