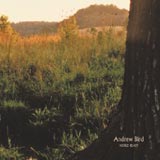 We should all just be glad there’s a musician like Andrew Bird out there. The Suzuki-trained violinist and master whistler has, for the past decade, put out some of the most heady, alluring records in independent music. Noble Beast is no exception.

Coming on the heels of Armchair Apocrypha, which showcased Bird’s refined existential angst, Noble Beast feels more like an offshoot of Weather Systems or The Mysterious Production of Eggs. Bird’s divine opener “Oh No” is a tight microcosm for the album: gossamer strings, talking about love and life through psychology and mathematics, with a dirty synth hit in the middle that makes your belly jiggle. Bird’s more apt to sing about polyhedrons, Persepolis or Protogenia than directly reference wanting to hold someone’s hand or being afraid for his own life. It’s these abstractions that allow the songs to open up.

There are parts on Noble Beast where, unlike previous albums, the abstractions feel too nonchalant. Where his lyrics don’t make their mark, Bird’s versatility as a musician and melodic sophistication take over. It’s a complicated life, but thanks to him, no matter how complicated it is, there’s some beautiful music to go along with it.