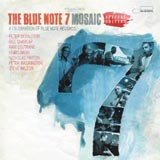 Perhaps the most venerated of jazz labels, Blue Note celebrates its 70th anniversary in 2009, and this CD is part of the festivities. An all-star aggregation of pianist Bill Charlap, trumpeter Nicholas Payton, tenor saxophonist Ravi Coltrane, alto saxophonist Steve Wilson, guitarist Peter Bernstein, bassist Peter Washington and drummer Lewis Nash offers fresh adaptations of songs from Blue Note’s modern jazz era. It kicks into high gear with Cedar Walton’s “Mosaic,” originally the title track to a 1961 Art Blakey album. “Mosaic” sets the tone, with plenty of solo space and opportunities for players to show respect for their roots while presenting their own interpretations.

With eight tracks clocking in at just under an hour, it’s a shame that the band didn’t include two or three more songs from the vast repertoire available. When the seven tour this year (with a March 15 stop in Louisville), they’ll draw from a larger selection than the songs on this CD.