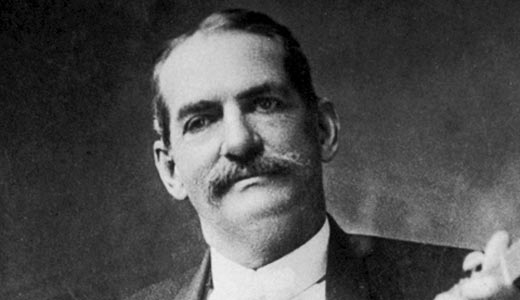 “I not only commend him to your intelligent notice but personally endorse him.”
—Mark Twain

At the risk of seeming aggressively anachronistic, or even atavistic, I’d like to suggest that you briefly call off your slobbering dogs of insatiable aesthetic appetite and spend several moments relishing the music of Polk Miller and his Old South Quartette, music that turns 100 years old this year.

The Tompkins Square label has recently released a CD of the complete recordings made by Miller and his group, comprising their 1909 Edison cylinders and the Quartette’s reappearance on 78 in 1928, 15 years after Miller’s death.

Polk Miller was both anachronistic and atavistic. He was the son of a Virginia plantation owner who grew up serenaded by the music of his family’s slaves — spirituals, work songs, dance tunes — and who, later as a pharmacist and a veteran soldier of the Confederacy, made his name as the impresario behind “Old Times in the South.” This traveling show (though Miller hated the term “show”) consisted of a lecture, recitations in Southern black dialect, and a performance by Miller (vocal and banjo) — with a rotating cast of black male singers — of religious material, sentimental Dixie chestnuts and a serving of minstrel songs.

The anachronism is that Miller never trafficked in blackface, he dressed “his men” in suits, and as the show increased in popularity, touring elite clubs in New York, Boston and Cleveland, it earned derision and threats of violence because of the semblance of “brotherhood” that it presented on stage. While the contemporary music publishers were pumping out such popular white-composed “coon songs” as “If the Man in the Moon Were a Coon” and “All Coons Look Alike to Me,” “Old Times in the South” was presenting “authentic” Southern black song performed by a racially mixed ensemble.

Granted, this ensemble — barring Miller and his friend Colonel Tom Booker, who occasionally joined the troupe on banjo — was often billed as a representation of, as one program had it, “the real Southern Darkey.”

Then there’s the issue of Miller’s discomfiting, atavistic motive behind the show: “I do try to give the older people something that would take them back to their childhood, and to give to the younger generation an insight to the happy past under the old regime in Dixie.”

Miller made it clear to reporters that the members of the Quartette were not his collaborative equals but, like the “men who are in my employ at my home,” his “servants.” “Old Times in the South” was a romantic trip down Miller’s memory lane, when slaves loved their masters, the South was unspoiled by Yankee imposition and the weeping willow was in bloom.

But it’s also an example of a willful nostalgia for a dark and evil chapter of history expressing itself artistically in a fashion too progressive for its times. Setting aside the Quartette’s sociological dimensions, their music is thrilling, admittedly enriched by its historical peculiarity, but not solely because of it. It’s awfully jarring to hear the anthem of the CSA, “The Bonnie Blue Flag,” sung by African American voices (especially since Miller’s voice is the lead, engendering an uncomfortable if not accurate feeling that “his men” have been compelled under no uncertain terms to sing lustily along).

But if you allow yourself to ignore your vantage point atop this side of history and just listen, it’s gorgeous and stirring. The sacred songs are a fascinating reminder of how firm a foundation underlies black religious music in America. The same goes for the more egregious minstrel material. Sure, the “Watermelon Party” immediately conjures up all manner of awfulness, but it’s also impossibly catchy. Mark Twain certainly thought so, declaring that “perhaps (America) can furnish something more enjoyable, but I must doubt it until I forget that musical earthquake, ‘The Watermelon Party.’”

Twain gets cover billing on the Tompkins Square release: “I think that Polk Miller, and his wonderful four, is about the only thing the country can furnish that is originally and utterly American.” Apart from the hilarity and wonderfulness of a CD bearing a Mark Twain “endorsement,” he was right. No matter how backward-looking Miller might have been, he made forward-thinking music with his Quartette. Like other enormously influential American music that followed it, theirs is a synthesis of disparate styles, locales and identifications; the very sound of, if not “brotherhood,” then at least a nascent spirit of tolerance, creative collaboration and mutual respect. After all, despite his puerile longings and chauvinist business dealings, Miller undeniably loved black music, and he arguably made a significant contribution to its dissemination and appreciation. Ignore for a moment his hammy lead vocal on that august spiritual number “Rise and Shine” — which song is instantly recognizable to 21st century American schoolchildren? It, or “All Coons Look Alike to Me”?

In 1928, when the Quartette mysteriously reunited — or reformed, no one knows for sure — in New York City, their seven new sides slipped into a massive stream of black music being commercially produced and sold in department stores and catalogs across the country. Enough whites in positions of corporate influence saw a value in African American gospel, blues, jazz and other dance music to invest in it; and enough Americans, both black and white, considered it worth consuming.

While Polk Miller and his Old South Quartette might jar our ears today — lyrically, sociologically, sonically (although laurels for everyone aurally involved in this reissue for succeeding in reducing the disc and cylinder noise to listenable, maybe even enjoyable, levels) — they deserve to be recognized as seminal figures in the history of American music.