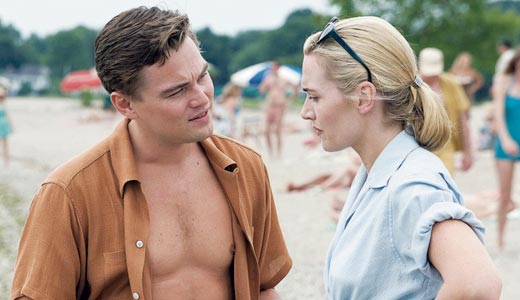 Kate, Leo, Kathy Bates and sex in a car … that’s about where the similarities end between “Revolutionary Road” and “Titanic.” The iceberg in this film cannot be seen nor touched, yet it sinks ships just the same. The ship in this case is a young marriage, the iceberg the constricting, ordinary and hopeless life of 1950s suburbia.

When Frank (DiCaprio) and April (Winslet) decide to marry, they agree the union should be unconventional — they’ll travel the world, Frank will pursue his passion (he doesn’t know yet what that is) and they’ll both avoid the routine pitfalls that plagued their parents. But as responsibility creeps in by way of children, a mortgage and a stable job to fund that stuff, the two find themselves another victim of conformity. Frank works at the same place his father worked for 30 years, a businessman among thousands of businessmen. April tends to the house and the children, quarantined by the white picket fence.

In a desperate attempt to grab hold of the life they dreamed of, April suggests they move to Paris. She will work as a secretary while Frank discovers what he truly wants to do, whatever that may be. Tapping into that carefree spirit that once defined his character, Frank agrees to the move, and the two prepare to relocate. Boxes are packed, traveler’s checks purchased, the For Sale sign hammered into the lawn, the kids, neighbors and bosses told. The couple is as giddy as the day they met.

But in a Sam Mendes film (“American Beauty,” “Road to Perdition”), all cannot and does not go as planned. April finds out she’s pregnant. Frank gets a sizeable promotion. As France fades from the picture, so does their love for each other. They once again find themselves playing the roles society has cast.

“You don’t forget the truth as you get older,” April shouts at Frank. “You just get better at hiding it.”

“Revolutionary Road” is not easily digested. Based on the eponymous Richard Yates novel, it is dark, depressing and, at times, a bit too familiar for someone raised in Midwestern suburbia. DiCaprio and Winslet prove they have the chops — their arguments were some of the most honest and gut-wrenching scenes I’ve seen in a while.

“You’re just a boy who made me laugh at a party,” she tells him, straight-faced.

DiCaprio’s Frank is torn between doing what’s expected and what he can get away with. Winslet’s April loses her spirit as conformity closes in. The film’s questioning of marriage is strong: When two independent beings become one, must they also surrender their identities?