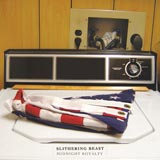 Nick Dittmeier began his career with A Suburban Blood Drive, a standard-issue emo band that abruptly recast itself as a cartoonish death-metal act once its Saves the Day-influenced pop-punk fell out of fashion.

Since Louisville’s indie winds have blown toward alt-country, Dittmeier has accordingly reinvented himself again with the quasi-solo project Slithering Beast. The mythos of indie rockers maturing into country troubadours is hardly lost on him, and he takes great pains to stress Midnight Royalty’s down-home flavor, smothering each song in pedal steel and couching his lyrics in wide-open, Americana themes.

But given his track record of dabbling in such disparate genres, the stylized alt-country of Midnight Royalty can only come across as dilettantish. Dittmeier’s vocals are particularly problematic — coming off the wounded whine and otherworldly shriek of his ASBD material, the exaggerated twang he displays here is only the most transparent of the album’s many unconvincing affectations. Midnight Royalty’s performances are tasteful and its songs pleasant enough, but they don’t erase the feeling that Dittmeier’s lateral move into country terrain is cynical and disingenuous.