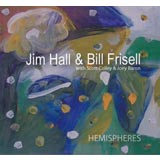 Jim Hall, a grand master of mainstream jazz guitar who has always maintained a sense of adventure, and Bill Frisell, who integrates digital loops with rustic Americana, have joined forces for a superb two-CD set.

Hall has worked with such masters as Sonny Rollins and Oscar Peterson, in addition to a hefty solo career. He has never backed away from challenges, and this set is further proof. Disc I is a series of duets with Frisell, with compositions by as well as interpretations of material ranging from Bob Dylan’s early “Masters of War” to the timeless blues of Milt Jackson’s “Bags’ Groove.”

Frisell is at times spacey (“Throughout”), while elsewhere he plays with almost classical restraint, exemplified by his delicate work on the disc’s beautiful closing ballad, “Monica Jane.” Disc II adds bassist Scott Colley and drummer Joey Baron for a mixed bag of originals and extrapolations on standards, such as “I’ll Remember April” (here re-imagined with a samba introduction) and a tip of the hat to Rollins on the upbeat and swinging closer, “Sonnymoon for Two.”

Hall, the elder statesman, is equally at home in all the styles, comping here, soloing there and interweaving melodic lines with his younger colleague. ArtistShare has been forging new ground by enlisting fans to underwrite works by artists, and Hemispheres is evidence of the heights reached by topnotch musicians freed from commercial label pressures.