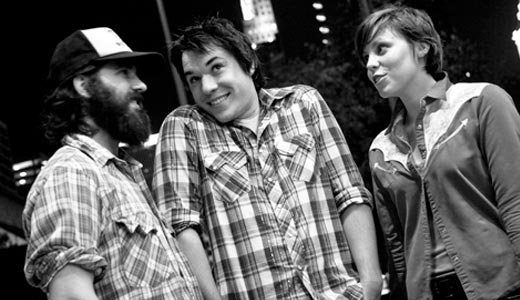 Green minds: The Wading Girl rehearses and records in a solar-heated home outside Roanoke, Va.Photo by Jessica Zwollinski

In Stearns, Ky., an entrepreneur named Miriam Strunk found purpose in running a hotel and, abiding a deep-seated eccentricity, he let his pet bear roam freely in the land around it.

Strunk’s business hummed along for many years, but his fortune capsized when a guest fell from the balcony of the hotel and died. He lost everything he had, except the bear, which might still be orbiting.

As a small but memorable consolation, Strunk’s relative Billy Wallace immortalized the tragedy in The Miriam Demos, the first release from Wallace’s band, The Wading Girl.

Wallace and classmate Sarah Garrison started the band while attending Wittenberg University in Springfield, Ohio. After college, the two, along with Josh Eernisse, moved into a solar-heated house built by her grandfather in Salem, Va., outside Roanoke.

“He finished it in 1982, and everybody thought he was crazy,” Garrison recalls. The band records there and posts its records for free or for a small donation on its MySpace page.
She describes Roanoke as “a fickle scene. There are times when we wish we could be in a real music town.”

The Wading Girl’s regular tour schedule — two to three weeks every two or three months — has turned Roanoke into a frequent stop. “There’s good music here, you just have to know where to look,” she says.

Their Louisville debut came via two sets at Air Devil’s Inn. “It was a life-changing experience,” says Garrison. One of the regulars liked Wallace’s shirt and insisted on trading for a triple XL Air Devil’s Inn T that still hangs in the band’s rehearsal space.

Garrison’s prediction? The metamorphosis continues: “Billy was talking the other day about how he listened to our first album, hinted that there’s folk in our future. I think the next album is gonna be soul.”