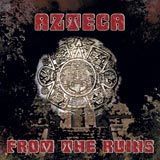 You should always be dubious when people tell you someone “discovered” or “invented” something.

For example, Balboa “discovered” the Pacific Ocean. Well, it was already there. How can you discover something that was already there? So, if you think Santana was the one who “invented” Latin rock, think again. While Santana was, undoubtedly, a driving force in the popularization and formalization of the sound, perhaps equally as important was Azteca. Pete Escovedo and his brother, the late Coke Escovedo, put the supergroup together after their departure from Santana’s band. Azteca recorded their first album for Columbia in 1972 and dissolved after two albums.

Though their longevity cannot rival Santana’s, their influence is felt as deeply. Azteca was the first Latin group to hybridize the sound, bringing in a fuller band and mixing in elements of jazz and funk. From the Ruins is a recording of their 2007 reunion concert, in honor of Coke Escovedo. But, there’s little to give an indication of the year. The sound is still solid early ’70s, a badge that the band is definitely proud of. As Pete says early on in the record: “Sounds like 1972, doesn’t it?” Nice work.