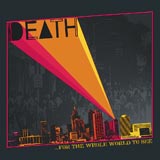 Death [deth]: n. Proto-punk trio from Detroit comprised of African-American brothers David, Bobby and Dannis Hackney, formed in 1971. Recorded by Funkadelic’s Don Davis and signed to Columbia Records, Death eventually broke up after Columbia wanted them to change their name. … For the Whole World to See is a compilation of their coveted 45s, which have never seen wide release.

Death’s music is a super-charged sonic burst blowing in from the Motor City. Like all great early punk bands, they go apeshit over guitar chords — strummed at mach speed, like on “Rock-n-Roll Victim,” or tripped out and slow like on “Let the World Turn.”

Combine this with David’s stutter-step guitar solos and brothers Bobby and Dannis’s funk-inspired rhythm section, and you’ve caught a case of Death. Being from Detroit, it leans more toward MC5 and Alice Cooper than the turn-on-a-dime punk of D.C. bands like Bad Brains (still years away when Death was recording). The songs are as compact as grenades and just as explosive. If more records like this start coming out, please, thank your local creepy scenester who buys out the merch table and hordes it in his mom’s basement. He may have kept something as important.