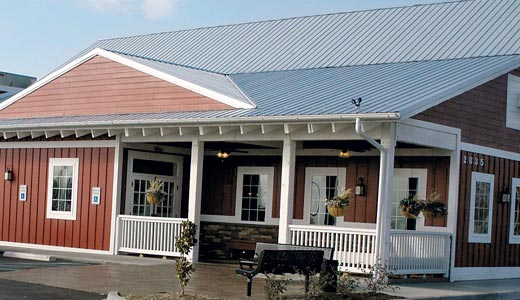 It would be easy to dismiss the dining options in little ol’ Jeffersonville, especially when you look across the majestic Ohio River and see … Hooters. But there are some rich and varied dining choices over yonder, from the delicious and affordable Mai’s Thai to the old favorite Come Back Inn.

I tried a couple of Jeffersonville’s choices recently — Our Best Restaurant, located just off Ind. 62, and Perkfection Café & Bar — and found good things at both.

Our Best, just 10 minutes or so from the Kennedy Bridge, resembles a big barn complete with chicken wire and metal tractor signs in a spacious casual atmosphere. It is a family-owned business that started as a single eatery in Smithfield, Ky., and has grown to a mini-chain of three, with three more in the works. The fare? Just what you would expect: American, homestyle cooking, in big portions, for reasonable prices.

My friend Shannon and I went there for lunch on a Saturday and found it moderately busy, with a waitstaff eager to make us feel at home. The menu tempted us with entrees like fried chicken ($8.49 and up), farm fresh catfish ($9.49), meatloaf ($8.99), and even country-style oysters ($13.99), paired with sides such as kale, pinto beans, corn and pickled beets.

We started with a half order of fried green tomatoes ($3.99) that disappointed; the cornmeal batter had little or no seasoning, and the flavor suffered. We surmised that the menu is probably geared toward the blander palette. (Salt, pepper and Frank’s Hot Sauce is on each table for spiceheads.)

Fortunately, the rest of our meal measured well up to par. The roast beef sandwich and mashed potatoes plate was nearly as big as Shannon. The side of peas she ordered was fairly bland, but the rest was a perfect lunch for a cold winter day.

My chicken livers were also not heavily seasoned, but hit the mark and were tender and plentiful. They went perfectly with mashed potatoes and country gravy, and the pinto beans I chose as my second side were firm and flavorful, lightly seasoned with pork and served with a topping of raw onion. We both also got fried cornbread cakes with our meals.

Throw in a couple of drinks, and the whole shebang was less than $30, which isn’t bad considering it eventually stretched into four meals. And luckily for me, Shannon let me have her leftovers. —Kevin Gibson

A few days later I stopped in at Perkfection, at 359 Spring St. downtown, and found something of a yin to Our Best’s yang: a metropolitan-style café/coffee bar featuring lighter fare such as sandwiches, wraps and dishes, and a fully-equipped coffee bar replete with lattes, cappuccinos, teas — you name it. Wine and beer also are available.

I was quite hungry (the leftovers were gone by this point), but instead of comfort food, I was looking at a menu of Greek salads, minestrone soup and goat cheese panini. Pretty much every item — sandwiches, wraps and such — is $7.75 or under, making for a healthy and reasonable lunch or light dinner spot.

I went with the Greek wrap (or Mediterranean wrap, as it was named on the chalk board) and was not disappointed: big chunks of roasted chicken breast, roasted red peppers, artichoke hearts, feta cheese and greens in a wheat wrap, cut into two fist-sized halves. A side of balsamic vinaigrette and an order of bowtie pasta later, and I was one happy lunch diner.

The seasonings and flavors are plentiful at Perkfection. I found myself searching my pasta for herbs I wasn’t completely sure I was tasting. (Basil? Oregano? Thyme?) The combination (kalamata olives, roasted red peppers, garlic, etc.) was such that it became one mild but pleasing flavor. Similarly, the combination of ingredients in the wrap was delicious on its own — but was paired perfectly and heightened with the slightly thick balsamic.

As I ate, I scanned the breakfast menu on the chalkboard next to the lunch counter and was enticed to the point that I decided to stop by the next morning to try it out — only to be told that breakfast service has been indefinitely suspended at Perkfection. The wasted trip (and sleep) left a bad taste in my mouth, to be sure, but I’ll definitely be back for lunch. —Kevin Gibson

Z’s earns an A

As you enter Z’s Fusion, you move into a blue river of light that runs across the ceiling and flows through the dining areas. We’re not in Kentucky anymore, Toto.

A $2 million renovation of the urban-renewal venue that long housed Kunz’s has created a “gorgeously revamped space — contemporary and eclectic — with a vibe that’s both energizing and somehow calming at the same time,” reports LouisvilleHotBytes correspondent Deb Hall, who was there for a pre-opening gala last Wednesday evening

Sharbiani, an alumnus of Louisville’s storied Casa Grisanti, has built an urban, hip and progressive scene within easy reach of the Kentucky International Convention Center, hoping to lure convention visitors as well as locals, defying the recession as he opens a fancy new restaurant in a dark January.

Note, however, that pricing at Z’s Fusion — even with the innovative cuisine of Chef Dallas McGarity — is set well below the level of the suburban Z’s. Lunch dishes will range from $8-$16, and dinner entrees mostly in the teens and lower $20s; the bill of fare tops out at $28.95 for an 8-ounce filet.

McGarity, who had earned a James Beard House invitation as chef at Volare, has created a globe-spanning menu that melds pan-Asian, Italian, Middle Eastern, Indian and American influences into something entirely its own.

Want a peek at the menu? Here’s Hall’s report on goodies served at the pre-opening:

Pickled oyster shooters: Raw oysters served in a mango-onion salsa with a tomatillo-sambal vinaigrette and a cucumber garnish, served in a shooter glass.

A good selection of sushi: Crawfish mango sushi roll topped with a spicy mayo was a favorite.

Lemongrass crab cakes lightly breaded with panko and topped with an orange-basil remoulade: all crab, no filler.

The Fusion Cocktail: a perfectly mixed combination of Finlandia grapefruit vodka, lychee liqueur and plum wine served in a martini glass. Clean and crisp, with a just a hint of fruit, this is dangerously drinkable and pairs excellently with the food.