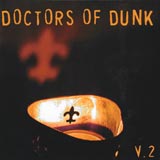 It’s difficult to put one overarching comment on Dunkenstein Records’ comp Doctors of Dunk Vol. 2. To say the disc is schizophrenic doesn’t do the wildly varied offerings justice.

There’s Minnow’s track “Irony,” which sounds like Guy Picciotto of Fugazi wandered into a cowboy bar with a copy of Being and Nothingness. Three tracks later, Ever Constant Sea offers its Tortoise-inspired instrumental gem “Fake Plastic Teeth,” followed by Bodyhammer’s booming “I Can’t Sleep.” Yeah, this comp really runs the gamut, which is pretty wonderful, because you don’t know what you’re going to get. There’s the 21st century vaudeville of Tamara Dearing’s “Don’t Ask the Road” and the lo-fi hypnosis of Tender Mercy and The Parade Schedule.

If you’re used to reading big Russian novels with sweeping plots and watching those foreign movies that move a little too slow for most people, you may not immediately fall for Dunkenstein’s latest concoction, but you’ll probably find something you like.