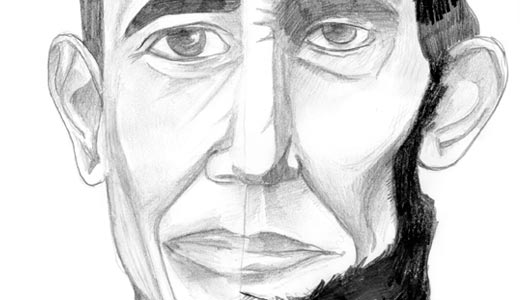 The nation was in peril. The president, guarded for his safety, took a secret route to Washington from his home in Illinois. The tall and slender new chief with a somber steadiness and eloquent manner moved into the White House with his wife and two children, ages 10 and 7.

Abraham Lincoln approached the Capitol steps, where he laid his hand on a Holy Bible and urged a divided America to be inspired “by the better angels of our nature.”

I don’t believe in ghosts, but somehow it is haunting that Barack Obama, a descendant of Lincoln’s legacy, put his hand on the Bible this week and took the reigns amidst another era of great trouble for America.

I wish I could have been at Mount Rushmore, watching the enormous eternal face of Lincoln as Obama spoke to the world, watching to see if the carved granite countenance would soften to a smile. Lincoln, who first witnessed a New Orleans dockside slave auction when he was a teenage boy, vowed to fight for the rights of all people.

History now binds Obama with Lincoln, ironically on the stoic rail-splitter’s 200th birthday, which comes Feb. 12. Could there be a better time to explore the life of the man born in Silver Spring, Ky., just outside Hodgenville? The man who spent his formative years, age 7 to 21, in Little Pigeon Creek, Ind.?

Those are worthy day trips from Louisville, but to really dig in, a journey to the Abraham Lincoln Museum in Springfield, Ill. is worth the time.

Prepare to be impressed. For the cost of one of the $300 plane tickets thousands of people bought on their way to the Obama inauguration, I recently took my family, including my history-loving 72-year-old mom, and my son’s bouncy 8-year-old cousin, on a two-day trip to Springfield that included a ride to the top of the St. Louis Arch.

The $115 million Abraham Lincoln Museum, opened in the spring of 2005, is as simple in concept as it is extravagant in precise detail.

“I thought it was just going to be another history museum,” my 16-year-old son said as we exited on a recent Sunday afternoon. My white-haired mom squeezed my arm and told me the little trip was one of the best Christmas presents she ever had.

As we drove back through the winter night sky and others slept, I watched Venus and Orion through the van windows and marveled at how I had never understood Lincoln the man. I had always known the iconic version cast in marble, sitting on a chair — the tormented yet wise old man. I reveled in the myriad connections between Lincoln and our freshly minted president. How it was a shame there are no direct Lincoln heirs to witness this moment.

Lincoln famously wrote, at a small desk now in his house a few blocks from the museum, “A House divided against itself cannot stand.” Obama burst into the American consciousness in 2004 with his anthem: “We are not red states and blue states. We are the United States.”

That similarity, I discovered, was just the beginning.

If you leave Louisville after a late brunch on a Saturday morning, and drive straight west on I-64, you’ll see the St. Louis Arch — Gateway to the West — by mid-afternoon. Go under the Arch, just a short walk from the Mississippi River, and you’ll have time to explore the modern and expertly achieved history of expansion into Western America.

We stood in front of animatronic models of Red Hawk and a black Civil War soldier, who told their stories; we learned about Lewis and Clark, western pioneers, and saw a model of a sod hut, just as a start.

By 9:30 the next morning, we were at the Lincoln home. Standing near the desk where Lincoln worked by oil lantern in the evenings, and looking at the living room floor where he wrestled his sons, I began to feel the man who looks out sphinx-like from a $5 bill and penny.

A few blocks away, we saw the Old State Capitol Building, where Obama announced his candidacy in February 2007, and within a few moments, we were entering the 40,000-square-foot museum.

In the huge, well-lit and inviting rotunda, we saw Lincoln’s life divided. The left side explained his years, from birth in Kentucky to his teens in Indiana and the adult years in Springfield. You start by entering a replica of the Indiana cabin; this section also explores slavery and Lincoln’s first encounters. I saw a professorly gent reading to his entranced daughter as she peered at an exhibit of an African woman with a terrified expression as she was being sold and pulled from her husband and child.

The right side features the White House years, focusing equally on Lincoln the man and the Civil War. For the student of history, a wall-sized electronic exhibit illustrated the ebb and flow of battlefronts and death tolls, racing through more than four years day-by-day in just minutes. I was reading a nearby play billing showing that assassin John Wilkes Booth had played the lead in Shakespeare’s Hamlet when Isaac tugged my sleeve, pointing exuberantly. “It’s Lincoln’s hat!” he said, his eyes wide. “Come look!”

After about 4 hours in the museum, down I-55 we drove toward St. Louis, before turning east on I-64 toward home.

Through the night ride, it occurred to me that Lincoln grew up without his mom, who died when he was 9, and Obama grew up without a father. Their life odyssey took them from place to place. Lincoln and Obama both showed up in Illinois without a single friend to greet them. Both ended up in the Illinois House before heading to Washington for four years — Lincoln in the House and Obama in the Senate. Then to the White House, both under clouds of concern about assassination.

Both men, known for eloquent oratory, entered Washington during unnerving times for the nation. Both men took small children. Willie and Tad (short for the nickname his daddy gave him — tadpole, because of his big head) were 10 and 7; Malia and Sasha are 10 and 7.

Lincoln gave his life for his belief that all people in America, regardless of color, have the right to life, liberty and the pursuit of happiness. Obama is the manifestation of that proposition.