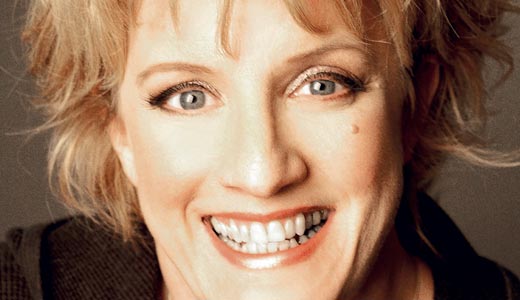 Suzanne Westenhoefer never considered leaving the lesbian out of her comedy routine when she started in the New York City comedy clubs in the early ’90s.

One of the first openly gay comedians in the U.S., most of Westenhoefer’s routine deals with finding humor in everyday interactions. No topic is off limits, she admits, and her material runs the gamut from strap-ons to misadventures in Home Depot. LEO Weekly caught up with Westenhoefer, who lives in Los Angeles, by phone last week.

LEO: What are you working on?

Suzanne Westenhoefer: I’m trying to write a book, but that is going … ooohhh … I mean, most of the time I just stare at a wall and try not to pick my own eyes out. Keeping up with Facebook … oh my god! It takes all my time. But mostly I’m just touring, trying to get on television. But touring is what I love. The live comedy, the instant connection, it’s my favorite thing to do.

LEO: Do you ever tone down your material?

SW: No way. Nobody does. No comic worth their weight is gonna change their act.

LEO: What’s the climate now in regards to being out in the comedy circuit compared to when you started in the early ’90s?

SW: When I first came out in ’90, and started traveling in ’92, they were terrified, horrified and upset. And now, there’s a bit of a difference. I wouldn’t say that everybody accepts it. It’s not so shocking anymore. Even if people hate lesbians, they’ve seen them. In ’92 and ’93, they hated lesbians and they never even thought they knew one. The shock element and that fear element is a lot less now. I would still say there are people who don’t approve and are upset — it’s just not quite so vibrant, for lack of a better word. That’s not really a good word, is it? It’s a good word, but not for that. But let’s use it. Let’s be different.

LEO: Did you watch the inauguration?

SW: I watched most of it … I was at the eye doctor’s. I had to watch it on TiVo later. Gotta say, it didn’t have the same effect. First of all, whenever you’re on the West Coast, almost everything feels like it’s already happened. You get up, turn on the “Today Show,” and you realize that it’s already been over for three hours. So you tend to get used to that anyway.

But it was good. I tend to have high hopes. It was a terrifying eight years. I don’t want to get all excited just to be kicked back, but on the WhiteHouse.gov website, first thing it says he’s going to work on is the civil rights stuff, which includes gender discrimination. I was shocked to see that at No. 1.

LEO: What’s the mood out there on Prop 8?

SW: I think everybody is kinda standing still to see what’s going to happen with these lawsuits, a couple class action suits. Everybody was kinda like, “What the fuck!,” and then, “We gotta march!,” and then there was this, “Wwwell … now what?” I think people aren’t sure what the next step is. A lot of people feel strongly that it’s going to get overturned. We can only hope that that is true.

In the meantime, I already got married. It’s insane — it can’t be constitutional that I can be legally married to my partner, but the people next door to us can’t.

LEO: After seeing “Milk,” I was inspired to get involved, it’s just hard to know where to start.

SW: Well, there’s just this “What are we supposed to do?” I don’t think people are sure exactly. [Rep.] Barney Frank (D-Mass.) says marches are just not it, you gotta get in there and lobby. But then I’m like, “Fuck, D.C. is a long way away, man!” I think the mood right now is: What do we do next? We’re ready to do it. We do need good leaders everywhere in the community … not just in California. Who’s any of our gay leaders right now? There’s nobody. We have famous gay people. We have no gay leaders. And we really could use that.

It’s interesting. In November, I’m doing the very first Sweet cruise (discoversweet.com). It’s a new lesbian cruise company, and the whole idea of it is about volunteerism and reducing our carbon footprint. It’s that thing where we all want to do right by our planet, but we don’t know how. So what they’ve done is merged vacation with volunteering. The ship leaves New Orleans, but before it leaves, we’ll paint a school, do something for Hurricane Katrina survivors. Then it’s back on the ship — eat, drink, party. Then at the next stop, we’ll get off and clean up a park. I’m so excited about it. It’s that same idea — everybody’s ready, everybody does want to do the right thing, but I think we lack organization and structure. It feels weird when things are going so bad to go on vacation, but if you can include part of your volunteerism, part of your carbon footprint, part of your ecological learning and being green … that’s perfect. And be with lesbians. Even better. A boat full of chicks!