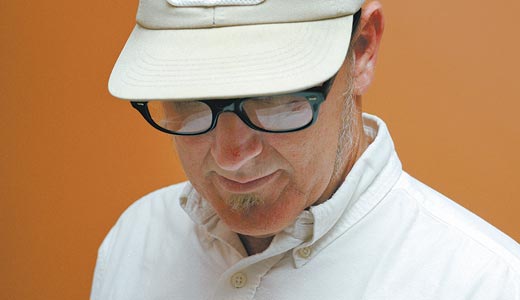 Lambchop, headed up by Kurt Wagner, returns to the 930 Listening Room Thursday.Photo by Michael Schmelling

For Oh(io), Lambchop’s man-behind-the-curtain Kurt Wagner took his hands off the wheel and let someone else drive the bus, but the production yields a methodical pastiche of twinkling keys, subtle organ, plenty of space and even a touch of vintage soul.

For his return trip to Louisville (his last a solo set supporting Yo La Tengo), Wagner totes a naturally shifting but no less capable cast of musicians behind him to realize his deliberative and compelling vision: Drummer Scott Martin and guitarists Ryan Norris and William Tyler split time with Nashville experimental act Hands Off Cuba; bassist Matt Swanson has recorded with Bobby Bare Jr. and My Dad is Dead.

LEO: Oh(io) is your 10th album. Has your stride kicked in?
Kurt Wagner: Well, I don’t know if it’s picked up. It’s certainly established itself as a steady thing that I do. In a way, I’ve slowed down in the fact that I tend to spend more time on the songs and ideas than I did when I was younger. I wouldn’t tinker with them too much once I had an idea. Now I tend to mull it over a little bit. So maybe that affects our output. I don’t know.

LEO: How geographic is this record, title notwithstanding?
KW: In general, the music we make, that fact that we are in Nashville — we’re basically natives here — we took a look at where we were from, rather than necessarily repelling against the notions of sounds that Nashville is known for. It was more: What would happen if we sort of embraced those notions?

LEO: How did you settle on the cover of Don Williams’s “I Believe In You”?
KW: William had proposed that. He was listening to that period country music that I was into, too. There’s a couple reasons: One, it had such a sort of Nashville sound to the original; it represents the Nashville thing. And there are lines in it that pointed to the current situation, the cost of gasoline, things like that. He decided it was somewhat relevant still. We’re presenting it in a way that wasn’t ironic, trying to be more sincere rather than being sarcastic.