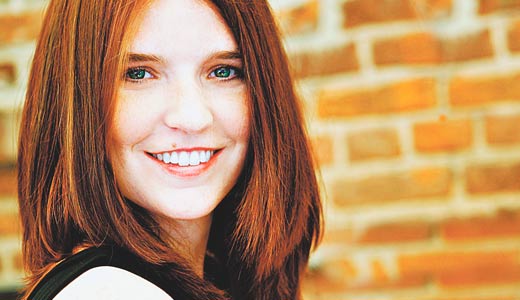 Bethany Griffin has taught English at Bullitt East High for years, during which time she has raised two children. Over that time, spending all her energy on her own kids or her school kids, she gained an understanding of youth that many adults forget with age.

Now Griffin’s young-adult novel “Handcuffs” has been published by Delacorte/Random House, and the author will appear at Carmichael’s Sunday afternoon for a reading/signing.

This novel addresses difficult teen relationships of all sorts — with siblings, parents, friends and neighbors. And — lest you think the title’s just some kink titillation — with the local police department, as well. But there are also ex-boyfriends who evoke continuing passion, and ex-friends caught up in cyberbullying.

Protagonist Parker Prescott’s most difficult challenges may lurk among the shadows behind everyone’s expectations that she’s “the ice princess,” full of self-discipline. She sees herself instead as self-limiting. But after the initial scene with handcuffs, and Parker’s own try at online mischief, a young man knocks at her door — and he might not deserve the restraining order under which he must live. Parker will learn from all these events … but she’ll learn in her own way, subject to her age, stubbornness and precarious hopes.

The author had her own hopes rewarded, with this story accepted in rapid order by a major literary agency and then one of New York’s most prestigious publishers.

“I guess I write a really good query letter,” she says. “I sent out to about 30 agents and about 15 of them requested either partial or full manuscripts. I ended up with an agent at Writer’s House … she was willing to work with me, and it’s the type of (agency) that can get books into Random House.”

Good timing might also have helped with acceptance of this storyline, which has surface elements akin to scripts from “Gossip Girl” or “Skins.” Griffin acknowledges that she’s heard about a turning tide in young adult fiction, “coming back to less-edgy material. Which is fine with me — I don’t think everything has to be pushing the limits. But I enjoy a lot of the more realistic stuff.” Such as the ex-boyfriend who excites and incites Parker into regularly considering her sexual willingness?

Griffin is a teacher who knows her town and its high school population (“more conservative than many places, yet if you stand in the hallway, you’ll hear a whole string of … just about every word imaginable”), and keeps an eye out for backlash against perceived moral transgressions. “Some of my favorite books have had huge campaigns against them. Death threats against principals who allowed them to be taught. ‘Fat Kid Rules the World’ is one that I’ve considered teaching, and then I read up on some issues that were happening with that book, which mainly just has adult language in it.”

Griffin’s editor at Random House is now considering her new manuscript “Greed.” It’s set in Louisville’s Highlands and has its own edginess — not involving hetero teens exploring metal restraint.