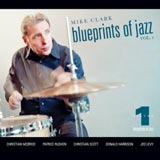 Drummer Mike Clark caught the attention of drummers when he played with Herbie Hancock’s Headhunters on Thrust. His hyper-syncopated funk set new standards. While his reputation as a funky drummer has remained solid in the three decades following, he has now released this more straight-ahead disc. It is the first in a new series offering artists who have been influential yet, perhaps, under-recorded to step into the limelight. In the liner notes, Clark stresses the importance of this opportunity to “defy the stereotype of my identity as a funk or fusion drummer.” He accomplishes his goal admirably, with the assistance of a topnotch group of musicians: saxophonists Donald Harrison and Jed Levy, pianist Patrice Rushen, bassist Christian McBride and trumpeter Christian Scott. Indeed, Clark shows his versatility throughout.
“Like That” and “Morning Became Electra” seem to channel Art Blakey’s Jazz Messengers, while “10th Ave. 1957” is slow blues. “Past Lives” maintains the kinetic backbeat for which Clark is recognized, but it supports a jazz rather than funk concept. “Thanks Len” is an up-tempo shuffle, followed by “Loft Funk,” which has a strong New Orleans feel. The other pieces on this disc further offer Clark the opportunity to showcase his drumming to advance the modern jazz in his soul.