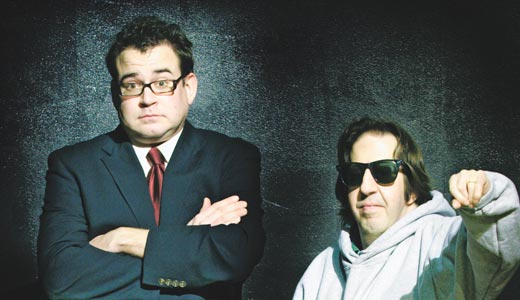 An event that succeeds nine years in a row and sells out the Kentucky Center’s MeX Theater is one to take note of, especially when it pulls together the best regional and national comedians and lets them loose on improv.

Chris Anger and Alec Volz, familiar names in Louisville’s comedy scene, celebrate their 10th year as the Louisville Improvisors, and together they continue to introduce top improv comics from around the country to our city. This weekend’s Improvapalooza 9 has attracted improv troupes from Indianapolis and Nashville, local jazz great Todd Hildreth and Los Angeles-based comic Stephanie Courtney, who headlines with the Improvisors.

Courtney is a member of the Groundlings, the renowned L.A. group that has spawned dozens of famous comedic actors. In addition to her many supporting movie and TV roles, she had a recurring role as Marge in the first season of AMC’s “Mad Men.” You might also recognize her as Flo, the pushy yet adorable brunette saleswoman in Progressive Insurance commercials.

“Stephanie is a natural,” Anger says. Her facial and physical performances bring laughs, which is what makes her characters so memorable. “Basically,” Anger says, “she had me at bulging eyes.”

While she acted and performed stand-up before joining the Groundlings five years ago, Courtney says she fell in love with the spontaneity improv provides. “Improv makes me more comfortable trusting beyond what I’m given — trusting my imagination.”

Her first visit to Louisville was last year for a show with the Improvisors. “I love me some Louisville,” she says. “Last time I was out here was my first time visiting, and I had so much fun. I just love the old buildings and space. I’ve lived my adult life in either New York or L.A., where every inch of space has been claimed. It was not a hard decision to come back.”

Anger says he screens groups nationwide for Improvapalooza. “I know within 30 seconds whether a group has it or not,” he says. One aspect of successful improv is whether the group works as a team or as a series of individuals trying to outshine one another. Both the Indy and Nashville groups offer stellar team efforts, he says, and should fit right in at this year’s festival.

The New Year marks a decade for the Improvisors. In 1998, Anger responded to an ad in LEO seeking members for an improv group made up of four people. After years of studying improv on the West Coast, Anger joined the group knowing the amateur approach to comedy wouldn’t sustain him. In 1999, he sat with fellow member Volz and said he was leaving the troupe. Volz replied, “Then so am I.” That year they formed the Improvisors and began regular shows around the city.

“Doing a weekly show, we got a little burned out,” Anger says. For the past few years, when not teaching at Walden Theatre or traveling to improv festivals, they’ve highlighted their act locally. Anger adds that a semi-regular show at Alley Theater is in the works.