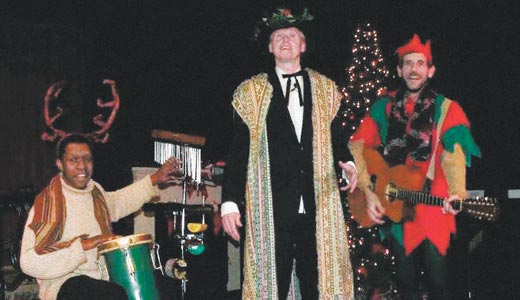 (The Alley Theater presents “O’ Santa’s Beard, Where Art Thou?” Written by Jak Son Renfro and performed by the Frozen Bottom Boys. Continues through Dec. 20 in the Alley Theater at City Block. All shows at 7:30 p.m. For info, call 589-3866 or visit www.alleytheaterlouisville.com.)

Writing a new Christmas show without irony and without ripping off a pre-existing classic is no easy task. Billed as a “bluegrass reggae fusion dramatic comedy rock opera,” the new one-act musical revue “O’ Santa’s Beard, Where Art Thou?” avoids the cutesy clichés that plague the genre, going full-tilt weird from the beginning. Writer and lead performer Jak Son Renfro tells a story in song of Santa Claus and his arch-nemesis, Anti-Claus, and though it’s magical enough for the season, Renfro gives us a healthy dose of madness to counteract the whimsy.

The show is like a Townes Van Zandt Christmas album performed by Jim Carrey, and the result is both charming and disturbing in all the right ways. Renfro is backed by his Frozen Bottom Boys, the lovable Serpent Wisdom world beatniks Ken Lucchese on strings and Earbie Johnson on percussion. The Alley Theater, nestled inside the City Block club complex behind a burnt-out school bus bar, feels like the kind of gem you stumble upon by accident. Its casual cabaret seating and industrial setting provide just the right vibe for this strange story.

December up at the North Pole is business as usual. The elves are swinging from the chandeliers while the reindeer play their infamous games. Mrs. Claus is baking cookies, and the jolly old elf himself is taking a nap, gearing up for the big night. Meanwhile, a sniveling, misanthropic recluse named Anti-Claus — think the Grinch crossed with Cruella De Vil — terrorizes the South Pole while hatching a plan to ruin this year’s Christmas.

When Anti slaughters a mother polar bear for a coat and abducts her orphan cubs, all that soft white fur triggers his addled mind, and a nefarious scheme to drive the world’s children to disbelief begins. Apparently, some of the same North Pole magic that enables Santa’s whirlwind world tour resides in his beard, and once shorn, all the fake Santas (“helpers,” they’re euphemistically called) would lose their fake beards at the same time, exposing them as frauds to all the children in all the malls in all the land. Without the belief of innocents, Santa can’t exist, which would suit Anti just fine. Using the mother’s pelt as bait and the confused cubs as pawns, Anti treks up to the North Pole to shave Santa bare.

If you’re wondering why a sociopathic South Pole hermit would make it his sole mission to spoil Christmas, it’s important to note that Anti-Claus and his single-minded seasonal sabotage is only possible because of Santa’s tireless pursuit of good cheer. If we are to believe in a Santa Claus who delivers Bratz dolls and Wiis to all good boys and girls, we must believe there is a force equal to him in power determined to stop him. Could there even be a Santa without an Anti? They are interdependent beings, bound together by the universe. Consider them the yin and yang of the Christmas spirit, bringing a necessary balance to the holiday season.