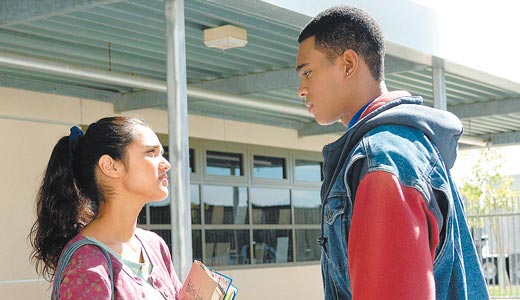 Picture it: Indie filmmakers, screwing around one day after a long shoot, shout, “What’s the scariest thing in the world?” Some joker pipes up, “A guy with a bag on his head staring into your window!” Disagreement, laughter, more shouting and good-natured ribbing follows, but the germ of the idea mutates into this great, knowing, funny — and occasionally scary! — spoof on indie horror flicks and the geeks who make them, courtesy of the Duplass Brothers (“The Puffy Chair”). Trust us, this is pretty good.

Newcomer Summer Bishil is a red-hot knockout as the 13-year-old Arab-American girl whose burgeoning sexuality causes conflict in her conservative hometown — and it doesn’t get any better when her bigoted short-fuse dad discovers that she’s dating a black guy! Surrounded by hypocrisy, drowning in hormones, abused and beaten and alone and frightened … in other words: teenage-hood. Writer/director Alan Ball brings us as good a drama about growing up in America as you could hope to find.

10 ITEMS OR LESS: THE COMPLETE FIRST AND SECOND SEASONS

Often compared with “The Office,” this ensemble comedy about life in a family-owned grocery store in the shadow of a big, corporate mega-chain has that same kind of humor. So why haven’t you been watching it? Probably because it’s on TBS. A lotta fun and bright, fresh faces. (Pun alert!) Check it out. (All clear!)

Before George W. Bush, the most hated man of the 20th century was undoubtedly Adolf Hitler, so it’s no surprise that scores of people tried to kill him. This National Geographic doc brings us some of the best attempts, from lone gunmen to his closest companions. We always figured that the only thing that’s spared Bush was our collective fear of Cheney.

John Stamos leads a pack of rabid comics, out to tear the former sitcom dad a new one in this ribald, raucous and profane stab at the “Full House” generation. With Lewis Black, Gilbert Gottfried, Cloris Leachman, Jon Lovitz, Norm MacDonald, Sarah Silverman and more.

Shia LaBeouf and Michelle Monaghan are terrific in this wildly imaginative actioner. The two are strangers, thrown together in increasingly bizarre and dangerous situations by a seemingly omnipotent voice on a cell phone, telling them to jump out of exploding skyscrapers, etc., all the while being implicated in a global terrorist plot. A breathless, crazy, roller coaster ride with Rosario Dawson, Michael Chiklis and Billy Bob Thornton.

The incomparable Ricky Gervais stars as a less-than-personable man who begins to see dead people — and they annoy the hell out of him — starting with the always-aromatic Greg Kinnear. Téa Leoni lights up the screen as Kinnear’s widow and Gervais’ love interest. Not a perfect comedy, for sure, but lots of fun.

Twentieth Anniversary Edition of Clive Barker’s seminal shocker. Takes the basic themes of life-as-torture from the first film, based on his “The Hellbound Heart,” and expands them, creating that rare sequel that’s better than the original. Ashley Laurence returns, now confined to a mental institution where an evil doctor uses her to resurrect Julia Cotton — minus her skin! — and summon the lethal Cenobites, lead by Pinhead (Doug Bradley). Gore, blood, sex and flesh, all taken to a new level in truly sick and twisted ways — we love this flick! With lots of great, new bonus material.

Well, we guess it was inevitable that making an actual MOVIE would prove not profitable enough to continue this great franchise, so the filmmakers decided to drop the “no longer a video game” pretense and just do the whole thing in CGI. A pity. Cartoon characters of Leon and Claire continue to fight cartoon zombies who continue to cartoon-mutate.

This comedy’s not terribly good, but we love the premise: Matthew McConaughey, a super-mellow soul-surfer/philosopher straight out of the 1960s, confronts the spirit-sucking corruption of the 21st century — corporate sponsorship, video games, reality TV, etc. — in his search for cool. Ably assisted by manager Woody Harrelson, his mentor (Scott Glenn), a groovy guardian angel (Willie Nelson), and lovely Alexie Gilmore, he must lead the world back to the beach and salvation.

Keira Knightley. Hmmm. Do we really need to go on? Corseted K-babe leads Ralph Fiennes and Charlotte Rampling through the tortured true tale of Georgiana, Duchess of Devonshire, who demanded personal freedom from a society that saw her only as exquisite furniture. This is actually pretty good, with Knightley in top form.

THE SECRET LIFE OF THE AMERICAN TEENAGER: SEASON 1

A surprisingly good, intelligent series, considering that it comes from Disney’s ABC Family channel and was originally a Back To School Special. Cute little Shailene Woodley is a smart, talented and pregnant band geek, trying to cope with modern-day life, high school and family with help from her friends. If that kinda sounds like “7th Heaven,” you should probably change your viewing habits.

THE TROUBLE WITH DEE DEE

A minor comic gem featuring the always-amazing Kurtwood Smith (“That 70s Show,” “Robocop”) as the retiring millionaire who decides it’s time to reign in his force-of-nature daughter, Lisa Ann Walter. She’s spent her entire life in an endless series of outlandish adventures using daddy’s money, and simply never learned how to live like a normal person. Can’t imagine why this is rated “R.”