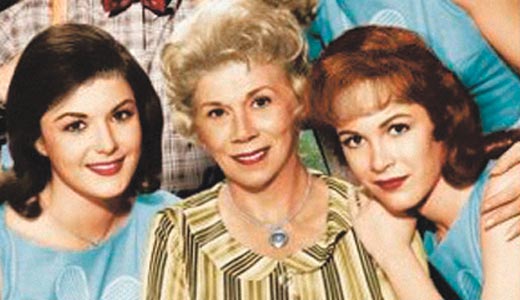 THE MUMMY: TOMB OF THE DRAGON EMPEROR

Brendan Fraser goes to the well once too often as Rick O’Connell, dim-bulb American adventurer, armed to the teeth and a bit long of tooth after a lifetime of marriage to Maria Bello (taking over for Rachel Weisz, who wisely declined) and raising a wise-assed kid to adulthood (Luke Ford). Together they go in search of an overblown CGI crapfest co-starring Jet Li and Michelle Yeoh. It just plain sucks and has nothing whatsoever to do with the original “Mummy” — which was one helluvalotta fun.

If you’ve never caught this History Channel series on the historical, social and technological effect of some of the world’s greatest cars, here’s your chance for roadworthy redemption. “Turbine” is a fascinating look at a radical form of propulsion whose time has come and gone — or may yet power the world. And “VW” pays homage to Dr. Porsche’s magic invention, an engineering marvel of the first order that deserves far more respect.

A&E’s Biography series brings a welcome look back at one of country’s Founding Fathers, who died tragically at the age of 29. With great honky-tonk music and terrific interviews from those who knew him, this is a must-own for any fan of real country music. Our own first memory of Williams was a pajama-clad trip to the Preston Drive-In where our parents watched a B&W “hoedown” movie that included Roy Acuff from the front seat, while we gamboled in the back, well asleep before the more adult “Peyton Place” came on. We miss drive-ins.

This truly adult anime is a remarkable achievement: It eschews all the usual big-eyed naked nymphets in favor of a savagely comic tale of survival and adventure. A modern-day businessman is captured by ruthless pirates, becoming part of their gang after being abandoned by his company.

For the TV generation: Oscar Wilde was an artsy-fartsy Irish writer from the late 1800s whose works have been the foundation for, oh, maybe half of all the movies and TV shows you’ve ever seen. His devil-may-care sense of fun was reflected in his unconventional life, but it all went down the crapper after doing two years hard labor for “gross indecency with other men.” A welcome biodoc on a truly excellent fellow.

Clueless Josh Evans reluctantly takes a gig as a drug courier for Michael Madsen when he meets Anna Zilberfarb, and together they trip out on the new drug that is “more addictive than air.” With cameos by Stickey Fingaz, Michelle Phillips and Dick Van Patten.

The movie musical, once moribund, is officially alive, well and living on a colorful Greek isle in this wildly wise and wonderfully wicked bit of summer fluff based on the songs of ABBA. Amanda Seyfried, about to be married, invites the three men — Pierce Brosnan, Colin Firth and Stellan Skarsgård — who may or may not be her father, while mom Meryl Streep twitters in, er, anticipation. Yeah, we could be snarky and call it a Chick Flick, but this damn thing is good, infectious fun. Enjoy.

What a great series! Women are encouraged, with a combination of yoga and other gentle techniques, to “transform from lazy lumps to skinny bitches.” Get the kind of body that makes other women hate you! Cool.

Your basic “giant rampaging pink-eyed albino maniac killing everyone in sight with railroad spikes” outing, co-starring the ravishing Ginger Kroll from the series “Tell Me You Love Me.” Trust us, you’ve heard all you need to know.

THE 2008 RYDER CUP: OFFICIAL HIGHLIGHTS FROM THE 37TH RYDER CUP

You got stuck in the traffic, wiped out by the windstorm and jack-booted by Metro parking-thugs; now see what all the fuss was about in this sports doc about Louisville’s “three days of breathtaking golf.” Puh-leeze. Golf wouldn’t be breathtaking if they used flame-throwers.

A popular arthouser from Italy about a film director, concerned over his daughter’s choice of husbands — and his own looming sexual scandal — who escapes to Sicily, where he joins a wild cast of characters, including a man who makes his living shooting wedding videos. But none of that begins to cover the fun that’s had along the way. Is it a comedy? A wild drama? A mystery? Damned if we know, but it’s entertaining as hell.

Tim “Dr. Frank-N-Furter” Curry may seem like an unlikely choice for lead in a biodrama about The Bard, but he’s really quite good. It seems that the young Will came from humble stock, battling not only nasty reviewers and class stratification but also the Black Plague in his bid for theatrical success. A.k.a. “Life of Shakespeare,” a six-hour Limey TV mini-series co-starring Ian McShane.

CRIME 360: THE COMPLETE SEASON ONE

THE CHEETAH GIRLS: ONE WORLD