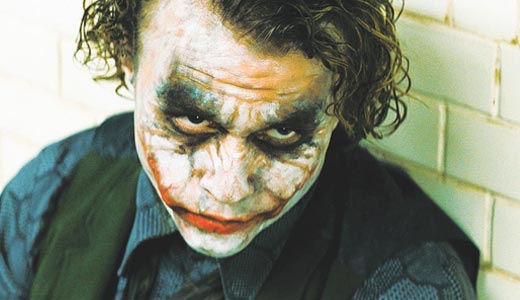 This explosive follow-up to the excellent “Batman Begins” finds Christian Bale’s Bruce Wayne now completely dominated by his Batman persona, while the city’s criminals — and cops — focus all their attentions on ridding themselves of his interference. But it takes a true maniac — the late Heath Ledger as The Joker — to push him over the edge. Ledger’s portrayal is so exquisitely frightening, so psychotically disturbing, so viscerally, insanely twisted that it’s hard to believe this isn’t rated R at times. The greatest superhero movie ever made? Must be, because it certainly has the greatest super-villain. A must-own, with all the requisite bonus goodies.

Here’s a movie we know you never heard of: A jaded, strung-out Limey policeman has lost all faith in humanity, moving numbly from place to place, alone and increasingly withdrawn in a world without meaning. Just when it all becomes unbearable, he is visited by a quintet of unusual angels who tell him that it is his destiny to battle Satan for the soul of mankind! Filmed on DV with a handheld camera, it is far more ambitious than the thousands of other homemade movies launched every week. Not always successful, mind you, but a unique and entertaining indie film experience, nonetheless.

This sequel to “Another Gay Movie” features loads of gay “Girls Gone Wild”-like debauchery in Fort Lauderdale, plus some surprising celebrity cameos, as a group of college-age queers compete to see who can score the most buttlove before their Preparation H runs out.

Better known as “The Novice,” this is a little-seen vanity project by Alan Arkin; a comedy/drama about a celibate Jesuit priest who begins to wonder what life would be like with a wife and family. Stars Jacob Pitts as the priest, Amy Acker (cute little “Fred” from “Angel”) as his girlfriend, and Arkin, Frank Langella and the incomparable Orson Bean as Pitts’ holy Jesuit bosses.

A wonderful Brazilian flick starring Sonia Braga as an earthy widow who remarries a staid and dependable husband. But she so yearns for the wild excitement of her whore-mongering, no-good first husband that his ghost returns to check on her! Wonderful.

Those crazy Kiwis at WetaWorkshop (“The Lord of The Rings”) created this killer 3-D CGI world, based on the books of Martin Baynton for NBC. There, a group of friends — and their BFF, a dragon named Dragon — go on outrageous adventures. A terrific bit o’ kid fluff and nonsense.

If you haven’t heard about this movie, you should head directly to the nearest vidstore and check it out. In August of 1974, a young Frenchman walked onto the roof of the Twin Towers, then stepped into history as his feet found the cable he had stretched between the two buildings. He spent the next hour dancing on that windy wire, high over New York City, before coming down to be arrested. This doc combines newsreel and the man’s own footage to show how he pulled it off — and it is unbelievably entertaining. Our highest recommendation.

Sony, which released a number of Frank Capra boxed sets in November, held three titles back, giving them the full digital remaster/restoration treatment, just for movie lovers like you. Now available: “Mr. Deeds Goes To Town” (Gary Cooper, 1936), “Mr. Smith Goes To Washington” (Jimmy Stewart, 1939) and “You Can’t Take It With You” (Jimmy Stewart, 1938), all co-starring Jean Arthur.

CBS picked up this kinda adult version of “That 70’s Show” after HBO passed on it (last we heard, it was heading to Bravo). In any case, the show’s creators look back at the year of the bicentennial when, apparently, all of white upper-middle-class America was hilt-deep in wife-swapping to the exclusion of all else. We don’t remember it that way, but then, they’ve never made a TV show about us, have they?

Vickie Shaw — last seen on TV in Margaret Cho’s short-lived 2005 “Wisecrack” series — is a riotous Texas lesbian whose frank talk about her kids, menopause and her partner, “Sergeant Patch,” will leave you breathless. Recorded live in Long Beach, Calif.

Two excellent pairings of classic WB scary stuff. First, Gig Young, Oliver Reed and Carol Lynley star in the Lovecraftian “The Shuttered Room” (1967), paired with Roddy McDowall’s great Golem shocker “It!” (1966). Then Patrick O’Neal brings his fear flasher and horror horn to the “Chamber of Horrors” (1966), while Christopher Lee acts perfectly evil in “The Brides of Fu Manchu” (1966). Not the usual “2-dead-title-cheapies”; these are all terrific flicks — and a steal at this price.