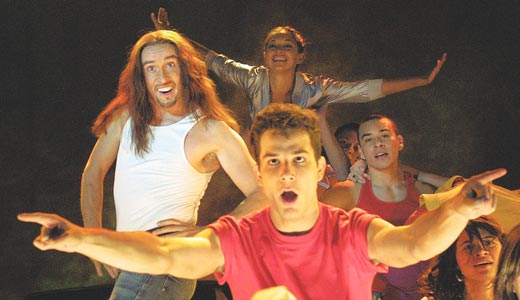 Obviously inspired by Roger Corman’s seminal “Death Race 2000,” a cross-country car race where drivers get points for killing pedestrians, this Jason Statham outing is pretty much the same thing, except set within the walls of a near-future prison. Joan Allen is the sexy warden who “arranges” for Statham’s participation in hopes of freedom, but it’s all a big conspiracy. Exciting and graphic “Mad Max”-like automotive mayhem, brutality, hot women and a thumpin’ soundtrack — sounds like Saturday night at our place.

We can’t decide if this is inspired lunacy or a whole lotta dumb gags, but whatever it is, it stars Steve Coogan as a bad-actor-turned-worse-drama-teacher who comes up with the worst idea in theatrical history: a musical sequel to “Hamlet.” (Because, uh, everyone died in the first one.) The musical numbers, including “Rock Me, Sexy Jesus,” are wonderfully wrong on so many levels. With Catherine Keener, Marshall Bell, David Arquette, Elisabeth Shue and Amy Poehler, how could this be anything but warped? Recommended.

An entertaining and insightful look at the end of adolescence through the eyes of four Hoosier high-school seniors: the jock, the popular girl, the wildly-artsy girl and the pimple-faced geek. Cliché? Boy Howdy! But it’s done so well you won’t notice. Recommended.

OK, right up front, we HATE this fuggin’ movie! Went to see it at the theater and couldn’t understand why some people were laughing their asses off. Most of the patrons were like us: looking around confused and asking, “Was that supposed to be funny?” Ugh. Apparently it appeals to women of a certain age who don’t get out much. Plot? Brad Pitt and George Clooney act silly for the longest hour-and-a-half in cinematic history while John Malkovich, Frances McDormand and Tilda Swinton try to stay out of the way for directors Joel and Ethan Coen. Life is too short.

This French melodrama with fantasy leanings may seem an acquired taste, but it’s certainly worth your time. A village nurse rescues a confused and suicidal girl. The girl’s stepmother offers the nurse money to take care of the girl, and a bond forms between them. But the girl’s troubled past hides a mysterious power that turns the world — and the viewer — upside down. A truly beautiful and remarkable film that deserves to be in every film-lover’s library.

A good, straightforward Hong Kong crime story that harkens back to the best of film noir. Driven by well-drawn characters and an intelligent script, this grimy heroin-fueled descent into hell follows the drug trade from crime lords to junkies as good people are sucked into a vortex of despair. But despite the dark surroundings, there are some surprising flashes of humor and humanity — just like real life! Excellent and now available on Blu-Ray.

There is no middle ground among viewers of this shocking indie arthouser based on the true story of the murder of decadent heiress Barbara Daly Baekeland, whose incestuous relationship with her own son was just one of the seeds of her downfall. Some thought Julianne Moore was distant and cold as Daly, and the whole thing badly written, while others have praised this as a tour-de-force for director Tom Kalin. Who is right? Who cares! Decide for yourself, you sniveling layabout.

This Disney/Sony Anna Faris “Legally Blonde” retread is pretty lame — it could have been a killer R-rated trasher — but we’ve seen worse. A Playboy Bunny gets booted from the Mansion (yeah, right) and winds up living at a dull sorority house populated by socially clueless young women (yeah, right). If you can buy that much, the rest is kabuki.

Don Cheadle continues to amaze in this deep and confusing espionage thriller. Guy Pearce continues his career of mucking up good flicks as a rabid counter-spy, investigating a bombing that leads back to the enigmatic Cheadle, a former Special-Ops hero who now seems to be a bomber-for-hire. But the truth is far more complex. A taut, intelligent film that would have been so much better had they aimed at an R-rated audience.

“Ye shall be as gods,” sayeth the serpent. A great price on this killer anime series (based on the vidgame) that combines sentient machines, corporate masters, slimy aliens and — best of all — actual ancient Hebrew parables to form a complex universe where mankind has forsaken Earth and sought pleasure among the stars.

SAVE ME! LOLLIPOP: THE COMPLETE SERIES