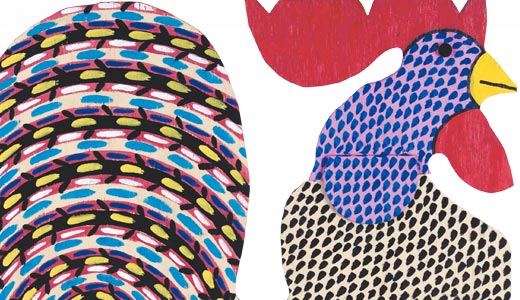 You have to like a man who finds humor in roosters.

Kentucky’s famous urban folk artist Marvin Finn (1913-2007) is best known for his colorfully painted wood sculptures. He definitely had a thing for chickens. “I saw an old magazine with a running chicken in it and saved the picture,” he once said. “I made the running chicken from that. I like the running rooster because he’s chasing after a hen. I’m going to keep one of those for myself.”

The Kentucky Museum of Art and Craft has had a relationship with Finn since the day it opened in the early 1980s. One of his famous whimsical roosters proclaimed its presence as it sat by the entrance of KMAC’s previous location on Main Street.

Thus it’s fitting they are honoring Finn with a retrospective. Some of the items shown are from their own permanent collection, with additional works from collectors.

His love of woodcarving came from watching his sharecropper father whittle during his childhood in rural Alabama. Farm life made him familiar with many of the animals he later sculpted, such as bulls, pigs and horses. What he didn’t know personally, he imagined, like unicorns and seahorses. Some are realistic. Some are not. But he usually didn’t alter the shape of the roosters; he preferred them to be natural.

The chicken shows up in family lore as well. Finn often told the story about when a snake bit one of his brothers — they killed a chicken, then placed it on the wound. Soon after his brother recovered.

He kept up the carving once he moved to Louisville during World War II. After marriage and the birth of his five children, he made toys and sculptures for his kids, just like he had done for himself as a child. His signature style developed, using salvaged wood cut into shapes with an electric saw, then painted brightly with dashes and stripes.

After his wife died in 1966, he pursued woodworking full time. He really didn’t reach a broad audience until 1972, when he sold his carvings at the Kentuckiana Hobby and Gift Show. Collectors started seeking him out, including former Kentucky First Lady Phyllis George. After that, there was no turning back.

One of his children, Chris Finn, also became an artist, working alongside his father in what had become the family business. Sometimes they collaborated, but as Marvin got older, Chris became the painter. After Marvin’s death in 2007, Chris continued creating their brand of folk art. Unfortunately, Chris died in October of this year, making his father’s KMAC retrospective his own as well.

Many of Finn’s birds have landed downtown. The 32 painted steel replicas, including “Running Rooster,” are in Waterfront Park. A ceremony is being planned to commemorate “Flock of Finns” next year.

“Little Bird,” one of the original sculptures used as a model in “Flock of Finns,” is in the silent auction accompanying the exhibition that will benefit KMAC programming. The 23 works can be seen at http://marvinfinn.weebly.com. To bid, contact Margaret Phillips at the museum. The bidding closes Dec. 11.

There are also two roosters in the auction. Finn wouldn’t have it any other way.