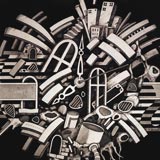 A friend reminded me of a joke the other day: If a nuclear bomb hits the United States, head to Louisville — it takes two years for anything to reach us.

Listening to The Detail does conjure feelings of being stuck in the past, or at least arriving late to a kick-ass party. Singer-guitarists Stephen Mandlehr and Daniel Hibbard stick to what they know: heart-on-sleeve philosophies about love and confusion based in abstract imagery.

What details don’t suffer from stylistic shifts uncomfortably close to Saves The Day, et. al., suffer from blatant mismatches: Quieter, up-close and personal narratives struggle to shine through busy beats and predictable half-time strategies, particularly on “Blow Out the Stars,” the beginning of “Avalanche” and “Gasoline.”

When the band is tightest — “Here + Now” — the lyrics choke on self-deprecation that’s convenient for the moment rather than sincere: It’s about time to fall apart here and now. I’d believe that if the music didn’t fight against that sentiment. Amherst’s CD release show happens at 9:30 p.m. Saturday, Dec. 13, at Cahoots (1047 Bardstown Road; 454-6687).