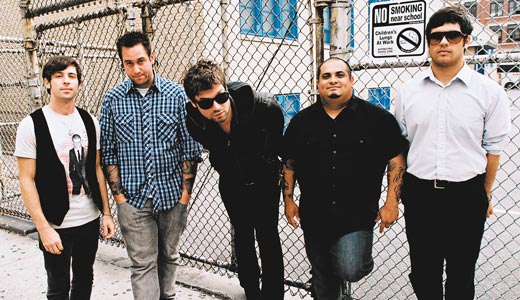 Friday, Dec. 12
Last October, Taking Back Sunday was in shambles. Guitarist and backing vocalist Fred Mascherino departed the band, citing the group’s inability to get along. Fans wondered if the band would ever return.

But out of the darkest of times comes a ray of hope. For the remaining members of Taking Back Sunday, the reprise from inner strife came in the form of a sabbatical.

“We were getting so far from each other as individuals, so we had to take a break to stop all of the moving,” says lead vocalist Adam Lazzara. “We were constantly moving, and not taking the time to consider each other as people. It wasn’t until we stopped and we looked at each other that we realized what was going on. From there it was new again. That’s why the album is called New Again.”

“When we were done recording and listening to the record, there was an underlying feeling of things being new on the record,” Lazzara says. “With everything we’ve done, it seems like now we’re more like brothers than we’ve ever been. It honestly feels like we are putting our first record out, when it’s actually our fourth.”

They’ve also added guitarist Matt Fazzi to the band. Fazzi was eager to prove that he wasn’t just a hired hand from the beginning, says Lazzara.

“Most everything on this record was a communal effort. There were two tunes that Matt wrote, and the rest of us wrote songs, but we wrote them together. But this record is more of a group effort.”

In a time of the year when renewal and change are buzzwords for everything from incoming politicians to the latest sales pitch at the mall, the change on the horizon for Taking Back Sunday seems sincere. It’s something Lazzara thinks about constantly.

“I think everything goes in waves, and happens in shifts. I feel like we’ve been on this rollercoaster for so long that now we are finally coming back around. I think it’s happening as a country, too. I write songs, but who cares? Now things are starting to move back and are getting shaken up.”

Saturday Dec. 13
The name Slithering Beast may conjure images of tight-pants-wearing hair-metal acts or a Republican in the midst, but the sound of Louisville’s Slithering Beast is anything but.

Instead of family values or songs about dragons drinking champagne, the group is a country-rock powerhouse, churning out big chord changes and even bigger choruses, and it all comes from the brain of Nick Dittmeier.

“I was in bands, and I was really frustrated with playing in bands. So (Slithering Beast) is supposed to be, like, my solo thing. It’s a full band, but it’s essentially my solo project,” Dittmeier says.

Rustic, almost ramshackle guitar strums sit alongside catchy, considered arrangements. The Slithering Beast aesthetic is on display on their latest album, Midnight Royalty. It’s a homemade album in every sense, from the intimate and catchy sound to the location where they recorded.

“We bought equipment last winter, and we did the album in our practice space this past summer. We didn’t stress out about the album. I wanted to sound natural rather than overproduced, and yet I wanted to have some pretty sound arrangements,” Dittmeier says.

From the opening Chicago-like horns (that’s a good thing) giving way to the Gram Parsons honky tonk of “It Just Don’t Make Sense” to the Shins-meets-Sticky Fingers-era Stones of the album’s closer “Moving On,” Slithering Beast’s album feels like a carefree and laid back exercise in pop songwriting. It turns out that the feeling wasn’t a coincidence. Despite wearing the country-rock or alt-country tag, Dittmeier and company are more than just Flying Burrito Brothers clones searching out a lost highway. Instead, they navigate the sound of Americana with a bright and golden guitar tone that betrays the sepia-toned twang of most country rock bands. In fact, Dittmeier bristles at the suggestion.

“We have to say we are alt-country to give people a reference to what we are. When you say country, it gives people the idea that we are a pop-country act. I don’t know — we don’t play with bands that sound like us. I think we come from different backgrounds that aren’t country music, so that helps.”

Be sure to catch Slithering Beast’s Midnight Royalty CD release show Sunday at 7 p.m. at the Keswick Democratic Club (1127 Logan St., 637-9639), where they will be joined by State Champ, Ribbon Pigeon and Mansions.