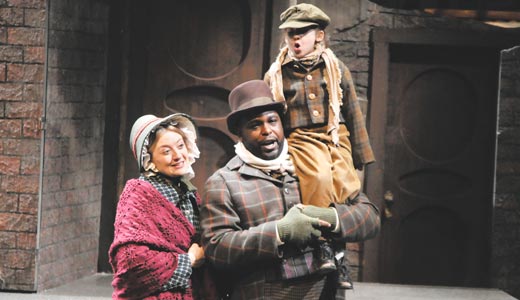 Photo by Harlan Taylor
<NUTCRACK1>
Dec. 4-6
‘Nutcracker in a Nutshell’

It’s been a long-standing tradition to take the kids to the ballet to see “The Nutcracker”; if MAGIC Inc. (which stands for Making Art Grow in Children) has its way, there may soon be a tradition of giving the kids a chance to perform in a production of the venerable holiday classic. Professional dancer Denise Gillman founded MAGIC this year with two key principles in mind: to provide young dancers exceptional performance opportunities and to develop, expand and promote dance education in the community. “It is our goal to expose the art of dance in a fun and interesting way to area children who might not have this opportunity,” Gillman said in a press release. The MAGIC dance company features outstanding area dancers ages 6-16 performing in a family-friendly version of “The Nutcracker” through Saturday at The Palace, with three public performances and two discounted school performances on the schedule. —Kevin Gibson
Louisville Palace
625 S. Fourth St.
nutcrackerinanutshell.com
$20-$24; 7:30 p.m. (Dec. 5), 2 & 7 p.m. (Dec. 6)

FRIDAY, DEC. 5
Brad Cassetto & the Bestsellers
Thank Minneapolis-St. Paul for Brad Cassetto. The owner of Sounder Audio on Jefferson Street and his family relocated from the (sort of) Great White North in 2004. His resume speaks volumes: Cassetto has lent his audio production talents to Babes in Toyland, The Melvins, Brother Ali and Atmosphere and four TV spots with then-presidential candidate Sen. Barack Obama in Jeffersonville last year.

In the late 1990s, he worked with Jeff Tweedy and Jay Bennett on the soundtrack for “Goreville, USA,” a documentary about a town that passed a law requiring the head of every household to carry a registered firearm. “They love their guns down there,” Cassetto said.

Friday he releases Camelbacks and Cul de Sacs, his follow-up to 2006’s American Landscape. Where Landscape dealt with travel, Camelbacks is about home and hearth.

“This record is all about what our homes mean to us, and how much of our personality and identity is invested in where we live,” he said. “Your prospects can change for good or for bad on a dime, and you find yourself in a different socioeconomic strata. You buy your ticket and you hope for the best.” Slackshop and The Summers open. —Mat Herron
Vernon Lanes
1575 Story Ave.
584-8460
$5; 6 p.m.

DEC. 5-6
Jason squared
Legendary outfit Jason & the Scorchers were known for turning betrayal into brutal rock ’n’ roll with their innovative mix of punk and country. In a style that would later be termed cow punk or alt-country, Jason & the Scorchers were one of the innovators. On Saturday, Jason Ringenberg shows off a down-home side of his impressive musical acumen by debuting his children’s show as Farmer Jason at Ray’s Monkey House. Ringenberg grew up on a hog farm in Sheffield, Ill., and he will undoubtedly be tapping some of his knowledge about livestock when he sings animal-themed children’s songs. Fret not, you die-hard Scorchers fans: The night before, Farmer Jason springs, Athena-like, into Unity of Louisville for a solo acoustic show. Tickets and more info for the Friday Woodsongs Coffeehouse show at Unity are available at unityoflouisville.org. The Ray’s show is at 1 p.m. for a scant $5. —Hank Willenbrink
•Unity of Louisville
757 S. Brook St.
583-5559
$10; 7:30 p.m.

Those into toe-dancing fairies and sugar plums have even more chances to get their nuts cracked this weekend as the Louisville Ballet presents its annual “Brown-Forman Nutcracker” and the U of L Dance Theatre rolls out “Clara’s Dream.”

This is the last year for the Ballet’s current “Nutcracker” production, and while it’s bittersweet, they’re looking forward to revamping the story into an all-new, million-dollar production in December 2009. And U of L’s “Clara’s Dream” is significant in that it provides serious ballet training for more than 200 students varying in levels and age. —Sara Havens
•Louisville Ballet
Kentucky Center
584-7777
www.louisvilleballet.org
$27; various times (Dec. 6-21)

Attention all you readers who devour second and third hardcover memoirs by people whose interests and style merit no more than a magazine feature! Please take this opportunity to learn a better way of memorable autobiography. Ed McClanahan, the Kentuckian who tripped around this great land with cultural bellwethers like Ken Kesey, has produced “O The Clear Moment,” a collection of connected tales that serve to bring us into the twists and trials that made him a perceptive humorist. A sadly snuffed-out high-school crush, honeymooning on a VW Microbus, etc., are conveyed with a unique balance of sarcastic bite and nostalgic glow. Yes, great self-deprecating humor does go back further than the invention of the term “snarky” — as you’ll see if you drop by the signing at Carmichael’s on Saturday afternoon. —T.E. Lyons
Carmichael’s Bookstore
2720 Frankfort Ave.
896-6950
Free; 4 p.m.

It’s almost 2009 and you need a calendar. Skip the frolicking kittens and bucolic landscapes this year. Instead, go for 14 months’ worth of real women doing real jobs.

Louisville photographer Sarah Lyon has produced the third in her series of female mechanics calendars. Full of American women who work on cars, planes and motorcycles, it includes two Louisvillians, a UPS aircraft mechanic and an autocross racer/engineer. The cover features Ferrari mechanic Tess Gape.

Nance Harris of Nebraska Trucker Magazine explains: “Because not many high school girls have ever met a female mechanic, they affirm an identity that doesn’t include that option. Only the strong and independent will venture beyond. Lyon did, and now she’s pulling together a tribe of her own invention.”

Such work deserves a party, especially one with music by DJ Kim Sorise. The calendar will be available there for $20 and can also be found at BMW Motorcycles, Carmichael’s Bookstores, Cherry Bomb, Dot Fox, ear X-tacy, Magnum Cycles and Why Louisville. —Jo Anne Triplett
The Green Building
732 E. Market St.
www.sarahlyon.com
Free; 5-9 p.m.

One of the first pre-orders John King received for his latest compilation, Louisville artists covering and reworking David Bowie’s seminal record, The Rise and Fall of Ziggy Stardust and the Spiders From Mars, was from www.davidbowie.com.

“They ordered one, and then they asked if they could have some others to do some type of giveaway with the David Bowie fan club, which is huge in Europe,” King said. “I had no idea. They have thousands of David Bowie fans that every day get online and talk about David Bowie. I was really shocked and surprised. After that, they sent me a (message) that they were excited about it.”

The 500-CD pressing gets the celebratory treatment Saturday with an in-store show ear X-tacy, where the CDs went on sale Tuesday, and at Skull Alley the same night. The Phantom Family Halo, The Slow Break, IamIs, Whistle Peak, Trophy Wives and Six White Horses perform.

“These songs are probably going to bring Ziggy Stardust to a lot of people who hadn’t really understood it before,” he said. —Mat Herron
•ear X-tacy
1534 Bardstown Road
Free; 6 p.m.

We like our institutions here in Louisville, and Actors Theatre’s production of Charles Dickens’ “A Christmas Carol” is as old as I am. We all know how it ends — Marley’s still dead, Ebenezer Scrooge sees the error of his miserly ways and Tiny Tim charms the dickens out of us with his big line. But even the most faithful traditions need a change every so often, so this year director Sean Daniels really took the “carol” part to heart, adding 16 songs to the holiday classic with live choral and instrumental performances by the cast.

Curtain time is a family-friendly 7 p.m. for evening performances and 2 p.m. for weekend matinees. If you want to splash out and really impress your kids, you can book some time with the richest little poor family in London. For an extra $20, have tea with the Cratchits and enjoy a backstage tour after the Dec. 14 matinee. Spoiler alert: Tiny Tim is really a girl! —Erin Keane
Actors Theatre of Louisville
316 W. Main St.
584-1205
$24-$44

Improvisation is a word used frequently in both art and music. So is the phrase “going with the flow.” Rodney Hatfield, also known around these parts as Art Snake, knows about such things.

An exhibit of his new encaustic abstract works is on display at the Kentucky Center, in association with Swanson Reed Contemporary. Music may be his first professional love, but his visual art is certainly a complement.

Hatfield’s blues band Tin Can Buddha will play during the Dec. 5 First Friday Gallery Trolley Hop from 5:30-7:30 p.m. Their first CD, Tin Can Buddha Live at the Quiltbox, available in December, includes a booklet of his art.