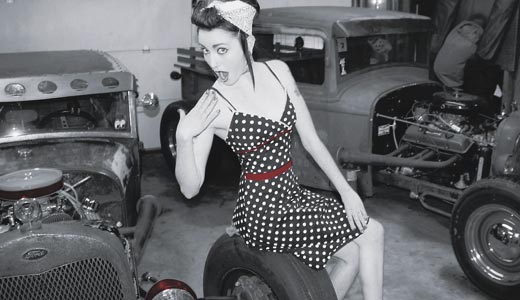 Actor and comedian Ben Stein said of Tim Northern, “I love the fact that he assumes his audience has a brain.” And as is the biased opinion of LEO’s editors, they also assume their readers have brains. Northern, a comic who has traveled one coast to the other, splashing middle America with his hilarious thought-forcing humor, visits Comedy Caravan this holiday weekend. Northern blasted the Chicago Comedy Festival in 2002 and was showcased in the 2003 Montreal Just For Laughs Comedy Festival. “I don’t do this because I want to be famous. I don’t want to be famous. I do this because I love it,” Northern says. —Jason S. Sitzes

The Fairness Campaign is hosting a pre-screening of “Milk” Thursday night at Baxter Avenue Theatres. “Milk” is the new film about the life of Harvey Milk, the first openly gay elected official in the United States. Directed by Gus Van Sant, the film stars Sean Penn as Milk, who was elected to the San Francisco Board of Supervisors in 1977. Milk led an oftentimes humorous but honorable campaign and fought for human rights across the board. He was assassinated in 1978 by city supervisor Dan White. “If a bullet should enter my brain, let that bullet destroy every closet door,” Milk once said.

“As we continue to work for full equality, it’s important to remember our history and acknowledge that the freedoms we enjoy today are the direct result of people overcoming fear and prejudice to come out, stand up for equal rights and demand to be treated with dignity and respect,” says Fairness co-coordinator Jeff Rodgers. “Harvey Milk’s legacy offers invaluable lessons about working together across lines of difference to build coalitions that empower people and strengthen the rights of all people. Milk’s approach to organizing continues to give us all hope.” —Sara Havens

If you want to get all dewy over a cat story, you can’t do better than “Dewey: The Small-Town Library Cat Who Touched the World.” This book recounts the true story of an Iowa librarian who finds a kitten deposited in the book drop. Both of these characters could use a fresh start, and their town could use a breath of fresh air, so soon the warm and precocious cat is sleeping in the stacks (he prefers Westerns) and making friends with the grumpiest members of the Library Board.

Dewey was a newsworthy story in his time — his obituary in 2006 made the evening network news — but librarian Vicki Myron needed some help to bring her story home in hardback. Enter Bret Witter, a writer/editor well versed in collaboration — and before you can say “library litterbox,” the book’s a national hit. Witter now makes his home in Louisville, and he’s stopping by the Main Library for a reading/signing. The event’s free, but you have to call or log on to request tickets. —T.E. Lyons

Let’s not go a step further without some explanation: The first question you should be asking yourself is, “What the hell is a Rat Rod?” Here’s your answer, via Louisville photographer Josh McNally: Rat Rods are funky, rough-edged boxes of attitude, assembled from a mix of parts from many makes and models. McNally puts together these bizarre cars, photographs them, and has created a wall calendar from his results. And that’s not all — don’t forget about the Rust Queens, which are, in McNally’s terms, an intriguing mix of early pinup-style and tattoo culture. The 2009 version of the calendar will be unveiled Friday at Derby City Espresso, with Rat Rods and Rust Queens on hand for what is being billed as a Pre-Christmas Reindeer Road Rally (apparently, McNally is really into colorful descriptions). There will also be live music by Marion Dries. So there are cool cars; hot, heavily tattooed women and tunes. Can you afford to miss this? Hell, you could finish all your Christmas shopping with one stop. —Kevin Gibson

In the “industry,” such as it is, December is traditionally a slow month for releasing records, touring, etc. Not so much locally, as one of Louisville’s most visible hip-hop acts, Skyscraper Stereo, releases a new album this month called You Can’t Do That on Television.

DJ Marky P. and F.N.M.C. (Friendly Neighborhood Master of Ceremonies) open. This show is a prelude to the latest 2009 Hip Hop Neighborhood Bar Tour: Beginning in January, Skyscraper, Nacirema, Jamili Brown, as well as T. McAfee and Azns N Bnzs, will play at five of the best neighborhood bars in town. —Mat Herron

I’m troubled this year. There’s not a single materialistic piece of mass-produced crap I need. I’ve got no money. My friends don’t have money. All our favorite local hangouts are closing. What gives? Is it possible to ask for a better economy? I’ve been really good this year. You finally delivered my Christmas wish last year in the form of Barack Obama. Thank you for that. Have some cookies.

Instead of sending your elves to Best Buy, Bath & Body Works or the Love Boutique, I suggest you hit up this art show on Saturday at the Mellwood Arts Center. Everything is $20, and there are one-of-a-kind pieces by 20 Louisville artists. No need to thank me for the tip, unless you have a winning lottery ticket lying around somewhere. Send Blitzen my love. —Sara Havens

Canadian blues-rock warhorse Pat Travers headlines Rock For Tots, a charity event that asks concertgoers to donate a toy for a needy child this holiday season.

Travers started his performing career with Ronnie Hawkins in the 1950s before moving to London at age 20 and landing a contract with Polydor. He was known to wear a jumpsuit, complete with maple leaf, invite audience members on stage to play air guitar and give away cardboard copies of his Telecaster.

Travers’ 1979 outing Go For What You Know remains a hot pick for guitar geeks. VIP passes for $25 are available with a limit of 75 tickets. A portion of ticket sales will be donated. Castor Troy opens. —Mat Herron

‘Louisville Clay – One of a Kind’

New Albany’s Gallery on Pearl is co-owned by John Guenther, a ceramicist, retired IUS professor and Louisville Clay member. Given these affiliations, it makes sense he would want to put on an exhibition and sale of the work of his fellow Louisville Clay artists.

Louisville Clay, one of the premier ceramics groups in our area, consists of top-notch artists who vary in production and styles but not quality. Recognizable names, such as Sarah Frederick, Laura Ross and Melvin Rowe, as well as Guenther, are just a few of the 61 ceramicists in the show.

This is a good opportunity to buy local crafts for the holidays. —Jo Anne Triplett

Sisto decided on the show’s name because she says critics have called her fiber art many things, including “rude, crude and lewd.” My guess is something in this exhibition will rile someone. The more than 20 pieces feature her signature expressions about injustice and overcoming adversity.

The strongest piece in the show, “Strange Fruit,” is based on the Billie Holiday song and is guaranteed to draw a reaction. uzoMa will show a free screening of the film “Strange Fruit” by Joel Katz on Jan. 15.

uzoMa is a good location for Sisto’s work. “As an art therapist and social activist,” says founder Angela Ramsey Robinson, “I believe it’s important to provide the community with public venues, not only to view artwork, but to have the chance to dialogue and interact around important issues.”

Sisto will talk about her work on Dec. 14 and hold a workshop on Jan. 11. Details are on the uzoMa website, as well as information on additional events. —Jo Anne Triplett