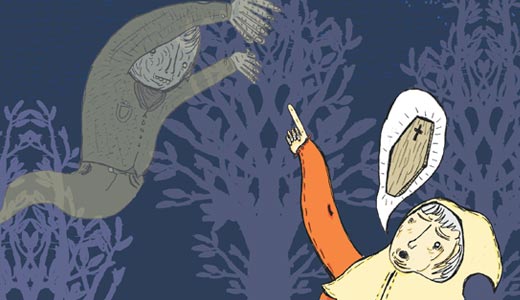 Bon Iver’s back to try again for a wintertime show. Justin Vernon’s indie acoustic band was bogged down by the weather and didn’t play as scheduled in March. Since then, the world has discovered the many charms of his almost-one-man-band debut disc. For Emma, Forever Ago came together as a serendipitous wonder. While in a lonely backwoods cabin nursing a broken heart and mourning a disbanded band, Vernon recorded a series of yearning songs intended as demos. Once he realized that he’d captured lightning in a bottle and studio retakes weren’t going to improve the originals, he tweaked the echo and brought in friends for minimal arrangement primping. The result will make many listeners’ best-of-year lists. The show tonight at Headliners will probably also include songs from the upcoming EP Blood Bank. Swedish folkie The Tallest Man on Earth opens. —T.E. Lyons

“Imagine a morning in late November,” begins Truman Capote’s “A Christmas Memory.” “A coming of winter morning more than 20 years ago. Consider the kitchen of a spreading old house in a country town. A great black stove is its main feature; but there is also a big round table and a fireplace with two rocking chairs placed in front of it. Just today the fireplace commenced its seasonal roar.”

The Filson Historical Society is presenting a reading of Capote’s “Christmas Memory” by William McNulty, who you may recognize as Ebenezer Scrooge in Actors Theatre’s current production of “A Christmas Carol.” The 1960s classic story is about 7-year-old Buddy, his cousin and an eccentric old lady. —Sara Havens

Bejeezus, the semi-annual lit and Southern culture magazine, is hosting a fundraiser on Friday. A silent auction includes artwork by local artists (Kathleen Lolley, Bill Green, Sarah Lyon and Letitia Quesenberry, to name a few) and gifts from some of Louisville’s best independent businesses (like Actors Theatre, ear X-tacy, Day’s Coffee and Glassworks). Bands The Slow Break and Yardsale will also be there, as will a cash bar (yes!) and possibly brownies (taking requests?).

“The purpose of Bejeezus is to showcase Southern culture and prove that interesting ideas and art can exist in places other than big cities,” says editor Hillary Harrison. “People should support Bejeezus because we’re small-timers and we’ve got bills to pay!”

When Ellis Paul decided not to renew his contract with Rounder Records, he and his management company set up a donation ladder to help pay for his next album, which he’ll begin recording in Nashville next month with producer and Sugarland member Thad Beatty. “We’re gonna amp it up this time around and give (the record) more of a rock vibe,” Paul says.

At ellispaul.com, fans can donate as little as $15 or as much as $10,000. In return, and depending on how much is donated, Paul will send you an advance copy of the CD, give you a lifetime spot on the guest list or, for the big spenders, list you as an executive producer in the liner notes. So far the gamble has paid off: Paul’s raised $70,000. “It’s been great,” he says. “We try to give them something that resembles what they’re giving.” —Mat Herron

Conceptual art in the hands of master artists makes for “ah-ha” moments. Chris Radtke and Stephen Irwin have separate exhibitions that speak together about perceptions of the human body.

Irwin continues to explore our society’s fascination with physiques, illustrating that what is hidden is as important as what is shown. Using magazine pages and resin on butcher paper, his imagery leads to physical and emotional discoveries.

Radtke constructed boxes of wood, glass, nylon and stainless steel to her body dimensions. Some are filled with shattered tempered glass equal to her volume. It is, literally, her space. So much so she calls them “self-portraits.” —Jo Anne Triplett

Fine-art-museum quality photography is the name of the game at the Paul Paletti Gallery. Most of the time the gallery is showing nationally recognized photographers. That means that the prints for sale may be out of most of our price ranges.

Not so with the latest exhibition. Paletti has selected little-known regional photographers with price tags to match, with prints for sale at $300 or less.

What happens when you give artists free expression but confine them to a rigidly specific medium? You can find out at “Deck the Halls,” the second annual skateboard-deck art show at Derby City Espresso.

This exhibition of photos depicting the general awfulness of mountaintop removal mining is typical in many ways: formerly majestic mountains with their tops shorn; a parent and her child, whom she must bathe in poisoned water because there is no other water but that which a coal operation has contaminated; the aerial view of an eastern Kentucky county that looks more like a moonscape than lush, forested terrain. Kentuckians for the Commonwealth, a social justice organization, has been fighting MTR for years, and is using this exhibition to keep it in the fore. Additionally, Heine Bros. will donate 50 cents per bag of each sale of its Mountain Dream coffee to KFTC; as well, Erik Reece, author of “Lost Mountain,” and poet Ron Whitehead give an MTR-themed reading Jan. 7. —Stephen George