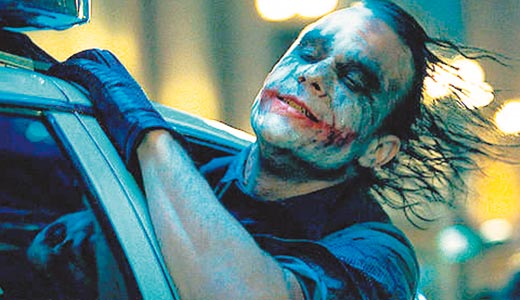 Standard Operating Procedure — Errol Morris’ artful and engrossing investigation into the 2004 Abu Ghraib torture scandal is not a simple or heavy-handed movie. In fact, it’s mostly about how little we can trust photos to give the entire story, and how even such seemingly straightforward images as a man being tortured can give rise to complex truths. It reminds you that people are both better and worse than they seem, even Private Lynndie England.

Vicky Cristina Barcelona — When I read that Woody Allen’s new movie was about two young, affluent American girls falling in love with a Spanish painter, I thought I was going to hate it. What’s less interesting than the bedroom shenanigans of the idle rich? And who’s more irritating than a temperamental European artist? Allen, surprisingly, couldn’t agree more. It’s an angry, cynical and at times hilarious movie about the vanity of youth. I can’t think of a movie where the protagonists are changed less by their experiences.

Up the Yangtze — Part of the Asian Film Festival, this film was screened only at the Village 8. Like “4 Months,” it’s an elegant, meditative film, this time about the changes that are happening to China. It’s heartbreaking but visually stunning.

Let the Right One In — This film is worth seeing for the last 10 minutes alone. Usually referred to as “that Swedish vampire movie,” it’s the type of film that doesn’t leave your mind. It’s just so weird.

Honorable Mentions: “Burn After Reading” was, come to think of it, every bit as cynical as “Vicky Cristina Barcelona.” I like that. “The Dark Knight” was very good, but let’s not get carried away. “Shotgun Stories” was seen by almost nobody but is an excellent rural drama. “Quantum of Solace” is the second-best Bond movie, after only “Casino Royale.” Finally, the “Lasagna Cat” shorts at the Last Call Film Festival were hilarious spoofs of the Garfield comics.

The Dark Knight — “Why so serious?” Heath Ledger’s Joker was no laughing matter. Creepy and bizarre-sexy.

The Boy in the Striped Pajamas — Ugh, this sad story of the Holocaust seen through a child’s eyes still haunts me.

Milk — I can’t imagine any other actor playing Harvey Milk as well as Sean Penn did. Here’s to coming out, as Milk would say.

Sex and the City: The Movie — One step forward for rich bitches, two steps back for women’s lib. Man cheats on woman. Woman leaves man and finds solid ground. Woman’s dumbass friend talks her into taking man back. Whatevs.

The X-Files: I Want to Believe — A head transplant? For real? Cheesy dialogue and a plot utterly disconnected from the show? For real.

Mamma Mia! — Was anyone else weirded out that Meryl Streep’s daughter was named Sophie in this film adaptation of the ABBA musical? Guess we know who she chose.

Cloverfield — This horror crapfest made me so nauseous, I threw up all my JuJuBes soon after. J.J. Abrams lost me.

Indiana Jones and the Kingdom of the Crystal Skull — Have you ever eaten something you haven’t had in a while and realized you don’t like it anymore? That happened to me twice this year — first, while eating a can of Spaghetti O’s with meatballs; second, when watching this latest Indiana Jones installment. Harrison Ford never tasted so stale.

Spring and fall 2008 films to date have been a pale shadow of the banner film-going year that was 2007. One bright spot was the summer movie season, where seasoned auteurs staged escapist filmmaking of the highest order.

Wall-E — With echoes of “A.I.” (the movie of the decade so far), Pixar’s movie mined depths of human emotion by way of a trash-compactor robot. As the remains of a human-forsaken Earth, Wall-E pursues a purposeless vocation and watches an eerie video copy of “Hello, Dolly!” alone in the evening. Sound designer Ben Burtt’s masterful aural landscape of alien-machine clicks and buzzes weds seamlessly with astounding visuals. Transcending the Pixar spoon-fed lesson, the strange, lyrical “Wall-E” is that rare thing: a freak blockbuster.

The Dark Knight — This sequel to the franchise reboot swathed itself in moral shades of gray that most comic-based stories can’t sustain. But Christopher Nolan achieved what Ang Lee set and failed to with the “The Incredible Hulk”: integrate brooding introspection with muscular action. The horror-movie tactics and muscular action (inspired by Michael Mann’s “Heat”) provided an electrifying visceral experience.

Indiana Jones and the Kingdom of the Crystal Skull — Breezy, Rube-Goldberg inspired action scenes here stand out among the competitive haze of slice-and-dice editing. Spielberg still stages action like no one else. The screenplay also has some surprisingly meaty ideas on the “myth” of the nuclear family in the Atomic Age and some resonant lines about gettin’ old (“How much time we lose waiting,” ruminates one character). And genius sound designer Ben Burtt (double name-drop!) brought back the best punching sound effect in the history of cinema.

Hellboy II: The Golden Army — The most inventive army of monsters since “Nightbreed” in the early 1990s. Guillermo Del Toro’s inspired creatures are bumbling, scary, quirky — the stuff of waking dreams and nightmares.

Be Kind Rewind — A videotape store that exists now? Jack Black’s magnetic brain waves? Remaking “Robocop” in a cardboard suit? Michel Gondry’s scrappy movie from Newark might as well be set on Mars. A couple of sequences (the ladders on the fence and the video-store break-in) feature some of the most striking visual comedy since Sellers’ “Pink Panther” movies.

Not a great year for movies, and not a great one for me going to the movies. Didn’t see as many as I should’ve, but among those I did see here are the favorites in no ranked order.

The Wrestler — A film that is a two-for-one sale price on redemption, “The Wrestler” gives us a rejuvenated and refocused Darren Aronofsky and a superlative comeback on the part of Mickey Rourke (both the actor and the character he plays). With “The Fountain,” Aronofsky seemed to be reaching futilely, and too far. This down-to-earth story of an honest man yearning painfully to recapture better, earlier times is as potently elegiac as “Requiem for a Dream.”

Frost/Nixon — Ron Howard may still be Opie Taylor to many of us, still the epitome of white bread, “simple” American values. Nonetheless, when Howard is on his game, as he is here, he can play with the big boys and girls. Frank Langella gives the performance of a lifetime, and the script by Peter Morgan both condenses and expands his original play.

Milk — This, more than “Good Will Hunting” or even “My Own Private Idaho,” is the masterpiece Gus Van Sant was born to make. “Milk” neatly combines the director’s love of the underdog, his pro-gay politics and his weirdly beautiful camera eye with a monstrously great performance from Sean Penn to create a sustained and sardonic essay on the nature of civil dissent and personal identity.

Man On Wire — No more perfect metaphor could be inscribed on the gravestone of Western capitalism than this elegant visual poem about a nutty Frenchman tightrope-walking from one ugly World Trade Center tower to the other. The towers are gone now, of course, as is the economic edifice they once embodied. A thrilling and heartbreaking documentary.

The Guitar — Robert Redford’s daughter makes an excellent indie film her first time out of the gate. Her take on bohemian sensualism in lower Manhattan works as both a celebratory and cautionary tale. Much to look forward to from this director.