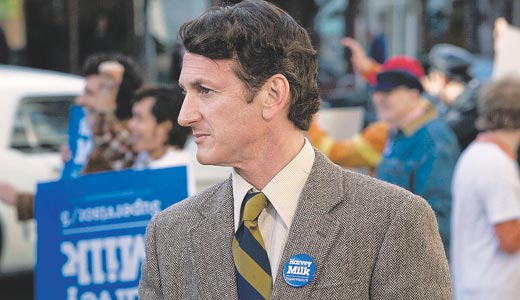 The success of “Milk” proves that when the necessary ingredients come together, the right film will be made. Scripts based on the life of San Francisco politician Harvey Milk bounced around Hollywood for more than a decade. Directors were picked, offers were made to top-caliber actors, yet a biopic never came to fruition. Young screenwriter Dustin Lance Black decided to give it a shot, and soon after seeing his script, director Gus Van Sant was on board, and Sean Penn agreed to step into the shoes of America’s first openly gay man elected to public office.

In any other hands, “Milk” could have been glamorized, over-sentimentalized and sensationalized. Van Sant offers an unbiased, warts-and-all look at a man with a passion and ability to lead. Milk was far from a saint, but he had the charisma and drive to spearhead the gay movement in San Francisco’s working-class Castro neighborhood in the mid-1970s, during a time when gays were arrested for congregating in bars and risked mugging just walking down a street. “We’ll take over this block,” Milk tells his team of dedicated campaigners in the movie, “then we’ll take the neighborhood.”

After several attempts at public office, Milk was finally elected to the San Francisco Board of Supervisors in 1977. He not only pushed for gay rights and led the successful campaign against Proposition 6 (which would’ve removed gays teaching in public schools), Milk fought for the rights of other minority groups, including union workers.

Penn astutely disappears into the mannerisms and eccentricities of Milk. The intimate, vulnerable scenes with his lover Scott (James Franco) were done with the same finesse as politician Milk, standing on his soapbox and barking his signature line into a bullhorn: “I’m Harvey Milk, and I’m here to recruit you!” The film chronicles Milk from a closeted New York insurance salesman to a carefree longhair operating a camera shop in Castro to the clean-shaven, suit-wearing, quirky politician.

Milk was murdered in 1978 by fellow supervisor Dan White. Divining the reason for Milk’s murder (and Mayor George Moscone’s) is where the film takes its most abrupt philosophical turn. Josh Brolin turns in an amazing performance as White. The film floats a few possibilities as to what drove him to shoot Milk and Moscone — jealousy of Milk’s attention, anger from losing his job and a subtle suggestion of repressed homosexuality are all presented.

It’s hard to watch “Milk” and not draw parallels to today’s gay rights movement, most recently the passage of Proposition 8 — banning same-sex marriage — in California’s November election. We’ve come a long way making gay rights a mainstream issue, which is part of what Milk was fighting for. But in light of Prop 8, it feels like we’re also back to the start in a way. Makes you wonder what Milk might say.