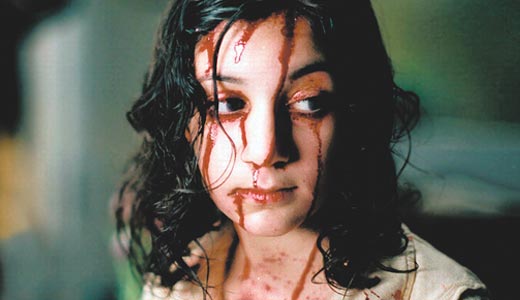 I can say with absolute certainty that I wasn’t swayed by the hype surrounding “Let the Right One In.” A Swedish (vampire) coming-of-age movie, the thought of watching yet another two hours of painfully awkward tortured adolescent Europeans did not excite me. Even worse, it’s a vampire movie, and there are very few vampire movies that have anything to offer an adult. At the risk of sounding my age, I believe vampires should no longer be seen as romantic figures once you’re old enough to actually have sex regularly and/or calculate your taxes.

“Let the Right One In” lulls you into thinking that it’s just another European art-house melodrama. Twelve-year-old Oskar (Kåre Hedebrant) is being bullied at school and has a strained relationship with his single mother. He’s lonely, introspective, ghostly white and obsessed with true stories of violence and revenge. One day, Eli (Lina Leandersson) appears. She’s the new girl next door who doesn’t go to school, doesn’t go out during the day and walks around barefoot in the snow.

The responsibility of feeding this vampire adolescent has fallen on her non-vampire dad, a well-meaning but tortured man who may have moral qualms about killing children and draining their blood, but doesn’t let on. He’s a father and has fatherly business to attend to. Mostly, he’s worried about getting caught and not being able to look after Eli.

Oskar is, shall we say, slow on the uptake. Long after some members of the community realize that something is amiss with Eli, the wide-eyed and innocent Oskar, so desperate for understanding, doesn’t put two and two together. Maybe he doesn’t want to see it. Or maybe he’s too young to know what’s magic and what’s normal. Regardless, they form a charming but doomed friendship. Eli teaches Oskar to stick up for himself. Oskar returns the favor by not making her feel like a monster.

This plot has all the makings of an overcooked melodrama. But John Ajvide Lindqvist, who wrote the novel on which the film is based, provides plot twists, shocks and surprises that never seem contrived or manipulative. Despite all the blood and guts — and there is a lot of blood and guts — it’s very touching.

It takes a lot of guts to make a Swedish, coming-of-age, art-house vampire movie set in the 1980s. “Let the Right One In” takes a gamble on being a Bergman-esque horror movie. And the gamble pays off.