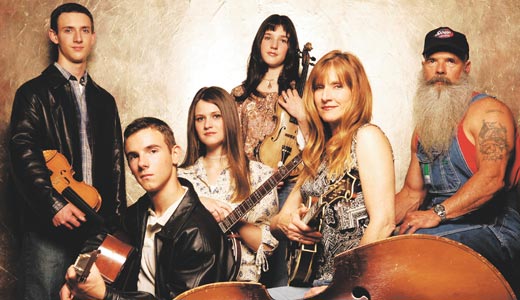 Family band Cherryholmes has been nominated for Album of the Year

Friday, Dec. 26
At the rate they’re going, family band Cherryholmes could bottle and sell whatever it is that makes them tick: The not-quite-traditional bluegrass band just earned their fourth Grammy nomination, this time for Bluegrass Album of the Year, alongside Earl Scruggs, Del McCoury Band and their boss, Ricky Skaggs, as well as one for Country Instrumental of the Year for the song “Sumatra.”

A Grammy nom’s influence cannot be ignored, but while Holmes says the accolade usually helps in “the publicity department,” their fanbase doesn’t necessarily notice it.

Still, how do you explain this streak? Might be that family chemistry. Might be something from above.

“A lot of divine intervention,” Holmes says. “There’s a blessing on this band that started when it was conceived. I certainly do see God’s hand in the whole thing, and I don’t think he intercedes to make us better than anybody else. But what he’s done for our family is make us something special. It’s not like we’re super humans, or we have more creative genius than anybody. It’s one of those intangibles. Nobody in the family has had any lessons. Everybody is basically self-taught or plays by ear.”

Cherryholmes’ “bluegrass on steroids” is attributable in part to the fact that a third of the band is under age 25, and even though traditional bluegrass fans might not take to it comfortably, plenty of people do. “We’ve had audiences that said we’ve flat wore ’em out. They were out of breath by the time that we got done.”

Wear yourself out at 8 p.m. Friday at Shepherdsville Music Barn (950 Terry Drive) in Shepherdsville, Ky. Tickets are $15 and are available on a first-come, first-served basis. The venue only holds 500, so be sure to get there early. For more information, call 239-8004.

The singer and guitarist for new-wave-post rockers The Instruction prefers inventing new characters and plots on the band’s nine-song album, Failure By Design.

When he isn’t singing about the end of the world, it’s hookers and vampires, the possibility of World War III, general destruction and the search for sanity. “They’re all different, pretty much, but they have the same kind of themes.”

Failure By Design might not be out until late January or February, but the group has already received radio play on 91.9 WFPK-FM on the strength of a seven-song demo this past year, a significant step for the high school chums who are, after two years of searching for their sound, getting serious.

“(Back then) it was more of a hobby to meet up once a week and try to write music,” Sakal says. “For me, it took a long time to finish a song. Being A.D.D., I would always write something and was never able to finish it.”