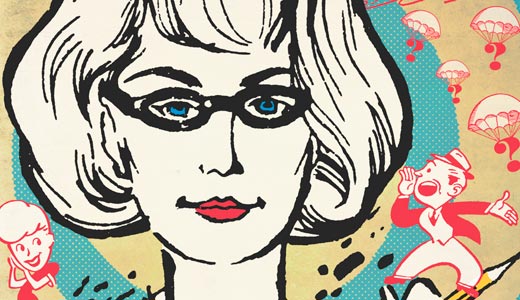 Someday we may look back on 2008 and decide never to look back on years again. True, there were many promising developments. We elected a unique candidate in American politics (and by that I mean the first man to ever quit smoking during a stressful presidential campaign). There were other positive trends. Religious zealotry was on the run: Americans ignored fundie attacks on Barack Obama, a Pew Center study revealed that the fastest growing religion in America is “whichever one will bring back our retirement accounts,” and gays and lesbians gained more civil rights (offer void everywhere except Connecticut, Massachusetts and Vermont).

It was also a great year for comedy, as mavericks and plumbers got caught by the gotcha media on the bridge to nowhere while socialists of change palled around with terrorists. Plus, the Yankees didn’t even make the playoffs! And after all our worrying about the ascendancy of China, the Olympics revealed that the Chinese totally wasted the past decade getting 10,000 skinny dudes to jump on pogo sticks in unison. With all that good news, surely we can’t think of anything to whine about. ¡Si, se puede!

When economic crises erupted in the housing, banking, auto and rolled-oyster markets, the global economy nosedived into what President George W. Bush referred to as his “final gift to the world.” Gas prices rose to $4.50 and plummeted to $1.65, proving that somebody in the supply line between the Persian Gulf and your neighborhood Thorntons is totally making that shit up. And the stock market lost so much of its value that Warren Buffett was rumored to be thinking about moonlighting at Chik-fil-A.

But the year is over and we can soon forget about all of that misfortune and get started on a new — and potentially even worse — year. That’s change you can believe in! But not until you take the LEO Weekly’s 5th Annual Not-Good-For-Nothing quiz. Good luck.

1. In April, Barack Obama made (and later apologized for) which of the following remarks about rural Pennsylvania voters?

C. “… and with a lot of hard work and determination and intervention (and some soap … a whole lotta soap), they can grow up to be almost as smart and productive as city folks …”

D. “… it’s not surprising that they get bitter, they cling to guns or religion … or anti-immigrant sentiment as a way to explain their frustrations …”

Match the evildoer to the deed:

A. Zimbabwean strongman whose leadership led to a humanitarian crisis

B. Dixie Doodle Dandy, he died on the Fourth of July

C. Somali “spokesman” who conducted media relations (without even saying “Arrrr” or “Avast”) after his band of pirates accidentally hijacked a Ukrainian freighter loaded with military weapons off the coast of Kenya

D. Author of a bestselling manifesto explaining that war is “the answer to so many of our problems,” rap is not a legitimate musical genre, and animals have no rights

F. Convicted felon who lost his re-election campaign as senator from Alaska

8. In October, Delta and Northwest airlines merged to form what new company?

9. Who said, “God has given me the ability to manage my time pretty well — I can handle a lot of balls.”

A. Pop star, actress, author and Kabala student Madonna, at her March induction into the Rock and Roll Hall of Fame

E. Pope Benedict XVI, in a post-Mass interview at Yankee Stadium in April

10. Thailand’s Prime Minister Samak Sundaravej was forced to resign following a scandal involving his role in a television cooking show. What was the show’s name?

A. “Selling Over-ripe Coconuts to the Fermented Fishmonger”

11. Which derisive comment did John McCain make to refer to Barack Obama during the second presidential debate?

A. “My friend the socialist”

B. The boost to John McCain’s poll numbers whenever Sarah Palin called Barack Obama a terrorist

C. A 48-hour unwanted side effect of using Cialis

13. After three decades at the helm of Microsoft, Bill Gates retired to concentrate on what activity?

B. All the sex he missed out on while becoming a billionaire

14. In a daring July operation, the Colombian military gained the release of 15 hostages by tricking a Colombian Marxist guerilla operation named after which popular F-word substitute?

A. Dead, B. Alive or C. Scientologist?

21. In a famous convention-speech joke, what did Sarah Palin claim is the difference between a hockey mom and a pit bull?

A. Pit bulls aren’t as intolerant

B. Pit bulls don’t force their pups to get married against their will

D. One is a vicious, bloodthirsty mongrel and the other’s a dog

22. For consistently voting with Big Oil and having the worst environmental record in Congress, The League of Conservation Voters gave Mitch McConnell which Italian-themed nickname?

A. Greaseball of Global Warming

B. Pope of Pollution

C. Don of the Dirty Dozen

A. A controversy that rocked Jefferson County Public Schools after a music teacher taught sixth-graders to play “Low Rider” on the recorder

B. An outcry over video-recorders being installed at gated communities as part of Barack Obama’s spread-the-wealth plan

C. A pissing match that erupted between the McConnell and Lunsford Senate campaigns involving an audio recorder stashed on Lunsford’s podium during a debate

D. The discovery of a webcam stashed in the women’s restroom at the Pink Door during a Chelsea Clinton campaign stop in March

24. In an effort to reverse its fortunes, Ford Motor Company announced it would:

A. Bludgeon its top management with tire irons

B. Buy Hummer from General Motors

25. God sent quite a few plagues to show his displeasure with Kentucky in 2008. Which plague did we not suffer?

26. What did hundreds of angry callers contact U.S. Rep. Ben Chandler to complain about in April?

A. His support for a national cigarette tax

B. His membership in a Facebook group called Hicks for Hillary

D. His controversial proposal to put the tops back on mountains

E. His appearance as Larry the Cable Guy at a celebrity-lookalike charity event in Washington

A. State senate “leader” who partied with lobbyists at Thunder, tried to shift court cases because he didn’t like the results, made a deal for rural construction projects while cutting big-city services, refused to raise taxes under any circumstances, killed casino proposals, killed a Louisville transportation deal, killed regulation for predatory “payday” lenders, tried to kill CATS, and quite probably laughs maniacally while biting the heads off small animals and tripping little old ladies and texting while driving and generally doing all he can to ensure Kentucky stays as backward, uneducated, overweight, cancerous, superstitious and polluted as possible, but otherwise isn’t really all that big a dick, especially when he’s not awake

B. Louisville banner-maker who thinks I-64 should be 86ed

F. Senate candidate who somehow managed to be even less popular than Mitch McConnell

33. In addition to other cuts, what cost-saving measure did Mayor Jerry Abramson announce in response to a $20 million Metro Louisville budget shortfall?

A. Replace the planned Center City project with a complex of pawn shops

B. A hiring freeze and a 10-percent pay cut for himself and the city’s top managers

D. Add the word “Remote” to the beginning of the city’s “Possibility City” slogan

Media in the Metro and beyond

34. In an effort to keep its doors open, The Courier-Journal announced it would:

A. Publish more splashy stories about the mansions of rich people

B. Replace David Hawpe’s column with “The Editorial Buzz” by Angie Fenton

E. Remake the Saturday Scene as a shoes ’n’ accessories catalog. Oh, wait. Never mind. How did that 2007 quiz answer get in here? Sorry.

35. How did Barack Obama announce his selection of Sen. Joe Biden as his vice presidential candidate?

A. A live appearance on MSNBC’s “Countdown with Keith Olbermann”

B. A full hour on Oprah’s couch

C. A 30-minute paid advertisement on all the major networks

D. E-mail and cell-phone text messages to visitors who’d registered at his website

36. The John McCain and Barack Obama campaigns posted a combined 2,151 videos on their YouTube channels in 2008. How many total videos did the George W. Bush and John Kerry campaigns post on YouTube in 2004?

D. 2 — One campaign video each

B. Rock Band: My Morning Jacket

44. Which performer had to be rushed to the hospital after suffering a “really intense split”?

B. “Mad Men” star Elizabeth Moss, after attempting to carry around too much Catholic guilt

C. My Morning Jacket singer Jim James, after falling offstage during a concert in Iowa

E. Oscar host Jon Stewart, after performing his own jokes during the writer’s strike

45. Which one of 2008’s Derby celebrities is the biggest douchebag?

E. None of the above. They are all just human beings, trying to get along as best they can. Sometimes all the mean-spirited name-calling in our society is really self-defeating. It’s Derby, for crying out loud. Just enjoy the party and leave the poor celebrities alone

The weird, weird world of sports

46. In testimony before Congress, what did an expert refer to as “Schwarzenegger’s upper body on Don Knotts’s legs”?

C. The racehorse in the era of drug use and inbreeding, after the tragic death of Eight Belles in the Kentucky Derby

D. NFL quarterback Brett Favre, who came out of retirement to take the helm of the “New York Bretts”

47. During halftime at a Freedom Hall “white-out” game against Georgetown, why did University of Louisville basketball coach Rick Pitino change out of a white linen suit into a more-customary black one?

A. A cease-and-desist lawsuit from the estate of Colonel Sanders

B. His perspiration caused his blue underwear to bleed through, making him “look ridiculous”

C. By wearing white and black in different halves, he wanted to “make a statement about ‘post-racial’ America”

48. Who said, “It’s disappointing; we came so close to being special”?

A. New England Patriots defensive lineman Richard Seymour, after the previously undefeated Pats lost to the New York Giants in the Super Bowl

B. University of Louisville star David Padgett, after the Cards fell to North Carolina in the Elite Eight