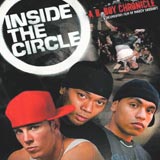 It seems like the “tale of two dancers” story has been told so many times it has turned cliché. Josh and Omar are two aspiring b-boys (hip-hop dancers, if you like) who used to be best friends until they joined rival crews (insert dramatic “Oooooooooh” chorus). Inside the Circle documents their struggles and victories on their parallel yet wholly different paths.

There would be no drama if at least one of them didn’t have a dysfunctional family and potentially career-ending legal problems. Josh is our contender here. He doesn’t respect his mother, has enjoyed joy-riding excursions and faces a felony domestic case that could spoil his future as a b-boy.

Maybe it’s because I’m cynical, maybe I’m a little sarcastic, but hasn’t this story been told on at least four episodes of MTV’s “Made” show, not to mention countless After-School Specials (god, I wish they still made those!)?

This documentary has won a bunch of awards, and many of the battles are very entertaining to watch. I just wish the rest of the story was as interesting.