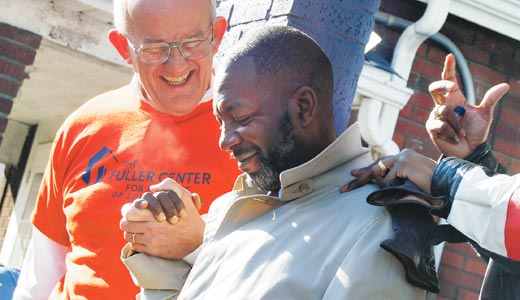 Charles Elaster is standing on the front porch of his new home, jingling a set of keys and smiling — a mirthful kind of smile, with mouth agape, seeming to involve at least all five senses.

Many people have gathered at this modest blue house on Boston Court, in west Louisville. With the exception of some reporters and neighbors who came to see about the commotion, most were complicit in the series of actions that led Elaster — a man who, until Monday morning, was homeless — here, with his set of keys, beaming like his kid just won a Nobel Prize.

“To be able to say I’m going home, that’s such a feeling,” the 48-year-old says, positively astonished at it all. “I’m elated.”

It’s a fine deal for anyone who can get it: Elaster has a 12-month lease, after which he’ll be given the deed to the house, assuming by that point he has remained current on his payments, which are somewhere around $200 a month. His loan has no interest. He will be counseled to learn about responsible home ownership, and a second mortgage will automatically be taken out on his house, to keep Elaster insulated from predatory lenders. This house was appraised at $35,000.

Elaster has fallen hard the last two years. Most of the assumptions one might make about him, given the political context of homelessness and assistance at this juncture in American life, would be false. He is not addicted to drugs or alcohol, he says. He has not done something stupid or ridiculous to make it impossible for his family to tolerate him, he says.

His story is nonetheless as complicated as that of any human being. Put simply, Elaster worked a string of low-paying jobs that didn’t cut it. He lived with a relative; when she died, he became destitute. Rather than impose on friends, he says, he started going to the St. John Center for Homeless Men, in east downtown, for hot showers and a place to sleep during the day.

Elaster has basically lived there — in and out, every day, in and out — for the past year and a half, sleeping in chairs, or maybe on a pad or cot. That’s where he found Steve Hale; or rather, he found an initiative being spearheaded by Hale and a group called the Fuller Center for Housing of Louisville.

Steve Hale is a tall man with a preacher’s imposition. He speaks with his hands, and he is goofy like a deacon — that is to say, his are the public qualities of a well-intentioned foil.

He also has an incredible amount of energy for this stuff; after Hale saw Millard Fuller on TV one evening touting the Fuller Center for Housing, he called the agency, wanting to know how he might start an affiliate here. He’d volunteered for Habitat for Humanity in the past — Fuller started Habitat — so he recognized the model.

Elaster’s home comes courtesy of the Fuller Center, a national agency that provides housing for homeless men, women and children. The Georgia-based nonprofit, which wears its Christianity on its sleeve, was established in 2005 by Millard and Linda Fuller. It quickly became a wide-ranging operation, boasting partnerships in 24 states and 15 countries.

The model for the crew of Louisville volunteers is simple: rehabilitate some of the thousands of run-down, demolition-ready houses across the city, particularly those in the West End. Elaster’s house — and one a few doors down — were donated by a property owner who also sits on the Fuller board; the donor will receive tax deductions equivalent to the properties’ values.

About six months after Hale saw Fuller on TV, the bald man with some gray wisps hanging on was riding his bicycle from 41st and Market streets to Americus, Ga. (a 192-hour trip), raising $62,500 to jumpstart the “Campaign of 1,000.”

The gist of this campaign is that he’d like to rehab 1,000 houses in 1,000 days. The initiative began June 1, and the backs of the glare-orange T-shirts that Fuller board members wear in the field (as it were) reflect the lofty sentiment, featuring a “Fullerstock ’09” logo in anticipation of achieving that particular goal (and a tongue-in-cheek homage to the famous ’60s love-your-fellow-human festival).

Hale has spent the last six years volunteering at the St. John Center for Homeless Men, among other Louisville shelters. During that time, he’s noticed some severe patterns.

“My biggest frustration is that I’m still feeding the same people,” he says.

According to the latest Coalition for the Homeless census, there are some 11,000 homeless living in Louisville in a given year. That’s high for a city this size, says Senlin Ward, the agency’s strategic planning and development coordinator.

She says the winter months are always the busiest.

“In this particular year, we’ve had more phone calls and walk-ins than normal,” Ward says.

Maria Price, St. John’s executive director, says they’re busy (as usual) right now, during white-flag season — when shelters literally hang flags on their visages to denote that any and all will be accepted.

There is also the matter of cost. According to a June 2008 study by the University of Louisville’s Kent School for Social Work, the total cost of services for the homeless was about $5.2 million in 2005. The overall cost — including jail, corrections, and various public hospitals and rehabilitation services — was more than $35 million.

The other thing many studies about homelessness show is that people tend to use emergency services more than long-term ones, which supports Hale’s point about serving the same people over and over. And that, as Hale finally learned, can provoke a particular kind of malaise.

There is some reason to be optimistic, although that relies upon the Kentucky General Assembly, a body notorious for thwarting hope. Ward, of the Coalition for the Homeless, says her agency has lobbied in Frankfort the past four years for low-cost identification cards — at $2 a pop, if they’re attained via a homeless shelter or service provider — so a homeless person can, for instance, enter a federal building to obtain Social Security payments.

She also says the city needs a centralized tracking and assistance system for the homeless — akin to Metro United Way’s 211 line for health services — so the 30 or so shelters here can take a more cohesive, centralized approach to providing services.

By the time it’s Hale’s turn to talk about how much it means to him that Charles Elaster now has this house, and that this campaign has kicked off with an appropriate spirit, the assembled group has been parked in the front yard about 20 minutes. It is something like 10 degrees outside; mercifully, the sun is shining.

“We’re all sick and tired of boarded-up houses being in the city,” Hale says, and a few people follow dutifully with an “amen.”

West Louisville’s Boston Court is an ideal place for this kind of initiative. It is not a street but a sidewalk, and it is lined with small houses, mostly shotguns and bungalows, in various states of repair. Elaster’s house is the finest looking on the block, and the other Fuller house a few down is on its way to second place. Several of the surrounding structures appear as if they will collapse during the next thunderstorm. There seem to be plenty of people around, too.

Alex Crume is a Fuller board member and served as the project manager on this house. She rehabilitates houses for a living, but says this was a new, singular experience. She and a crew of volunteers spent about six months and less than $10,000 getting the place — which a neighbor said looked like it was ready for the bulldozer — into this shape.

The house is small and cozy inside, furnished and decorated during the 48 hours preceding the unveiling by a group called God’s Designs, a conduit of St. Matthews Baptist Church. There is a single bed, a real whopper of a writing desk and plenty of closet space. The bathroom is spacious enough, and there is a splat of back yard off the kitchen.

After more than 30 minutes and a series of glowing, cherub-cheeked affirmations from the front porch, there has just been a final invocation by Pastor Derek Wilson, of the nearby Spirit of Love Center, another partner. Elaster has his house, the group is disbanding, the cameras are being packed away, and Rue McFarland is looking satisfied.

“It feels wonderful,” says McFarland, the vice chair of the Fuller Center for Housing of Louisville. “I mean, what better Christmas could you have?”