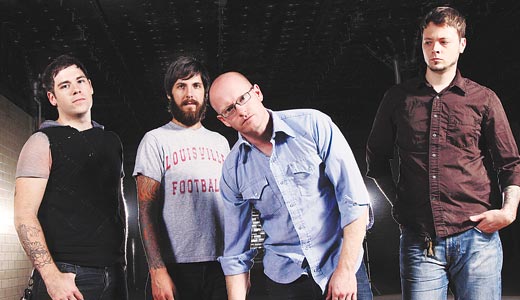 Jason Noble, Shipping News
The New Year
S/T
Written over a four-year period, this record is incredibly beautiful without being saccharine in any way. Features the always-amazing Chris Brokaw. The first track (“Folios”) is totally inspiring.

Meshuggah
Obzen
Words fail to describe this band. The most mutant, lyrical, punishing, sci-fi heavy metal in the world. Think James Earl Jones as Thulsa Doom in the first “Conan.” All others must weep.

Juana Molina
Un Dia
One of world music’s brightest stars returns with her fifth album. A brilliant combination of folk, electronica and percussion with lovely singing in Rioplatense Spanish. Odd, engaging and experimental, this Argentina-based songwriter will seize your heart.

Young Widows
Old Wounds
Louisville’s most evil-sounding rock music as performed by some of its nicest guys. If you’re worried indie music is going all softly pop or acoustic, this skeleton-shattering album will make you smile. Check out the vinyl edition if you get a chance.

Black Crowes
Warpaint
After three listens, I knew this was going to be a top-five album. Released this past January, Warpaint is easily the band’s best effort since, oh, I don’t know, Amorica. While new guitarist Luther Dickinson (North Mississippi All-Stars) is a welcome addition, the real stars are the brothers Robinson. Melding blues, rock and Americana with lyrical themes of patriotism, love and redemption, this is easily their most mature work.

The Doors
Live at the Matrix, March 1967
This group of recordings has often been bootlegged but has never before seen the legal light of day. Before Miami, before the alcoholic bloat, before the fall, to catch The Doors at their best was to catch one of the most transcendental, cutting-edge — yet still garage rock — bands of their era. These are the only known live recordings of this era in the band’s history.

Grachan Moncur
Evolution
At long last, the heaviest Blue Note recording ever is re-released on CD. The title track is easily one of the most eerie and beautiful pieces of music I have ever heard. An absolute must for every collection.

Wooden Shjips
S/T
Psychedelic, drone-y, heavy, melodic. Seems like a long time since a band has made me want to dance like a Viking on acid.

AC/DC
Black Ice
If you have a formula for getting someone off, and they go nuts while you’re doing it, stick with it. Riff-heavy and stomp-rockin’ — love it!

R.E.M.
Accelerate
Brings me back to a time when life was tight-rolled and V-necked.

Black Keys
Attack and Release
Raw rock with threads of psychedelic R&B. They push it hard and lay it thick.

Femi Kuti
Day by Day
It’s got boogie. I can ball to it. Serious grooves. Can’t ask for more.

Black Diamond Heavies
Every Damn Time
These guys are like a beer taped to a fist punching a microphone. These mo-fos bring it and slap you in the face with it, but no matter what, you want more every damn time.

N*E*R*D
Seeing Sounds
This was the perfect summer CD. Pharrell and company really stepped up the production here. “Sooner or Later” and “Love Bomb” are theatrical anthems complete with a breathtaking guitar solo and lush horns, respectively. The “Everyone Nose” remix with Kanye West and Lupe Fiasco is easily one of the best rap songs of the year.

Kanye West
808s & Heartbreak
What makes this CD click is that Kanye’s life is so public, we pretty much know the meaning behind each song. Such is the tribute to his mother (“Coldest Winter”), his struggle with superstardom (“Amazing”) and his failed engagement (“Robocop”). So emo, so personal, so NON hip-hop. Only Kanye could get away with it.

Li’l Wayne
Tha Carter III
I am not supposed to like this CD, but it shows that Wayne has come a long way since 1997. Tha Carter III crosses so many lines. Hip-hop heads will dig the lyrical fire of “A Milli,” “Dr. Carter” and “Let the Beat Build.” Commercial zombies will play “Lollipop” and “Mrs. Officer” ad nauseam.

Kidz in the Hall
The In Crowd
These darlings of the underground released their sophomore set back in June and did not disappoint. Double O is easily the star of this album, as his production — smooth strings, crisp percussion and classic samples — is some of the best of the year.

Q-Tip
The Renaissance
A huge Tribe fan, I was pumped when Tip made his long-awaited comeback. Unlike his last solo venture, this album stays true to the laid-back, jazzy Tribe form and should somewhat satisfy our hunger for a new Tribe project … for now.

TV on the Radio
Dear Science
This is the album I was hoping they’d make. While I was impressed by the last two, this album made me a serious fan. Every song is a hit. Their own sound — just dancier, poppier and more soulful than the last two.

Li’l Wayne
Tha Carter III
My hip-hop-pop fave of the year. On first impression, I didn’t expect to ever be a fan. Great voice, great lyrics, great beats, big balls. You have to respect a man who puts the phrase “fuck the police” into a love context. He isn’t quite as great as his ego, but that is why you love it.

Warmer Milks
Soft Walks
Hailing from outside Lexington — a little bit Palace, a tiny bit Crazy Horse, a whole lotta something else. Experimental lo-fi Southern rock that gets loose on noise jams.

Mount Eerie with Julie Doiron & Fred Squire
Lost Wisdom
Being a huge fan of the Microphones, this is no surprise. This album is how I like Phil Elevrum most: no noise, all folk. Doiron accompanies with her soft, beautiful voice, and Squire adds guitar; check out “Calm Down It’s Monday.” They put on a great show at Skull Alley this fall.

MGMT
Oracular Spectacular
Released in ’07 but (somehow) on everyone’s best-of ’08 lists. Very impressive debut album. Creative and wildly catchy. Songs that make you feel as young and beautiful as the young men who wrote them. A confidant electro-rock album in the vein of Flaming Lips and sometimes Air, but completely different. Full of hits.

Kaiser Chiefs
Off With Their Heads
The group’s junior release is noteworthy, full of Brit-pop chant anthems and a catchy chorus. You can’t go wrong.

Hadouken!
Music for the Accelerated Culture
Imagine your 15-year-old brother and his friends stole all your music gear, did heavy amounts of amphetamines and recorded an album. Worth it for “That Boy That Girl.” Wish they would keep their Prodigy records and throw out the Bloc Party in their collection, but that’s just me.

Elbow
Seldom Seen Boy
No big upset here. Winner of the Mercury prize. Elbow always write strong albums with big hooks and haunting vocals. When the guitars kick in on “Grounds For Divorce,” close your eyes and enjoy it.

Cancer Bats
Hail Destroyer
Need a soundtrack for your next rampage? “Lucifer’s Rocking Chair” reminds me of the vocal stylings of Out’s Chad Donnelly. An immediate buy.