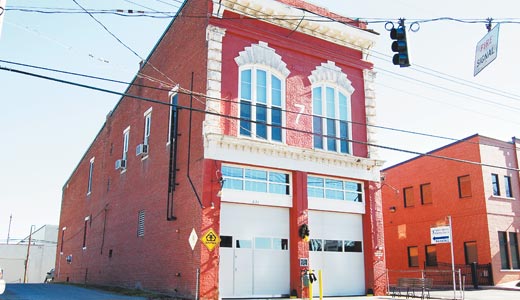 Dozens of Old Louisville residents listened as Louisville Fire Chief Greg Frederick matter-of-factly explained why closing the fire station near Sixth and York streets is no cause for concern.

Not surprisingly, the crowd strongly disagreed, and within an hour the relatively tame discourse spiraled into a heated exchange inside a cramped meeting room at the 1151 Centre on Fourth Street. Two hours later, impassioned residents dominated the conversation, ultimately voting unanimously on a motion urging the mayor to postpone the Jan. 10 closing and consider alternatives. And if he refuses, they unanimously endorsed a plan to take legal action, possibly seeking an injunction.

By the next morning, the residents had their answer: “We won’t be delaying and it will be closing after the first of the year,” says Chris Poynter, a spokesman for the mayor, pointing out that there are six other firehouses within two miles or less. “This is not going to impact their fire service.”

Mayor Jerry Abramson recently announced plans to shut down the fire station that houses Engine 7 in Old Louisville in an effort to chip away at the city’s $20 million budget shortfall. The announcement sparked outrage among residents, who maintain such a densely populated neighborhood — replete with historic homes and high-rises — should not lose any fire service.

“Due to its close proximity to other firehouses, we feel like we can close this station without affecting response times,” Frederick told residents Monday night, pointing to a map of nearby stations that will absorb the house’s approximately 2,000 runs a year. “There wouldn’t be any adverse effects if Engine 7 were no longer in operation.”

Insisting that the city was planning to close this particular fire station even before the current fiscal crisis, the chief said an earlier study revealed doing so would not increase the time it takes firefighters to respond to an emergency. After a consulting firm recommended the closure in 2005, the department purchased software to calculate response times on its own, ultimately a the same conclusion.

“The consultant said we could close that station three years ago. Now we have three years of data supporting that,” said Frederick, adding that response times would remain within the national standard of 4 minutes, 59 seconds.

Several residents questioned that data, including Jessica McCarty, an assistant professor of geography at the University of Louisville and a member of the West St. Catherine Street Neighborhood Association.

“I hate to say this, but it seems like a flawed system,” said McCarty, on the younger end of the age spectrum in the audience. “You are using software developed before I was born. It’s not exactly the forefront of technology.”

Unable to answer the assistant professor’s detailed questions about the department’s method of collecting data, Frederick appeared exasperated for the first time during the meeting, saying, “If we could put a firehouse every 10 blocks in the city our response time would probably be two minutes, but we can’t afford to do that.”

While most residents relayed worries about fire service declining, a few pointed out that the 138-year-old red brick station at 821 S. Sixth St. is the oldest continually operating firehouse in the country, something that should be preserved.

In response to concerns about historic preservation, however, Frederick said: “What I’m telling you is that a firehouse built six years after the Civil War ended is not necessarily in the best location [to serve the city].”

Although it is unclear what will happen to the building when the firefighters move out next week, it likely will remain intact because it is listed on the National Register of Historic Places.

Standing among the overflow crowd in the back of the room, a young man wearing a dark blue sweatshirt with a Louisville Fire Department patch raised his hand to speak. “Everybody here knows this has to do with the projected budget crisis,” said Jon Lucas, prompting applause from the audience. “You have special circumstances in this neighborhood that require more firehouses,” added Lucas, one of 12 firefighters assigned to the Engine 7 station, all of whom will be reassigned to vacant positions at other stations.

Because Old Louisville is so densely populated with residents in aging Victorian homes, high-rise apartments and special-needs facilities, Lucas believes shutting down the fire station near Sixth and York is a gamble motivated by the prospect of saving money.

Sitting in the audience, Metro Councilman George Unseld, D-6, said he shares the concerns of his constituents, particularly because many of the homes in Old Louisville are “tinder boxes surrounded by brick.” But he added that in his opinion, “This is a done deal,” a remark that drew the ire of several residents, one of whom traded barbs with the councilman throughout the evening.

“That’s a defeatist attitude and we don’t need that,” said Fred Nett, who lives nearby on Sixth Street. Nett is among a number of citizens who’ve been petitioning local media and elected officials to give the issue attention.

Criticizing the mayor for misusing tax dollars, the Old Louisville activist said the Engine 7 firehouse survived the Great Depression, and that the current recession is hardly justification for its closure.

By the end of the meeting, it seemed Unseld had changed course, saying it’s time to stop talking and start strategizing: “Our livelihoods, our homes … everything is at stake here.”