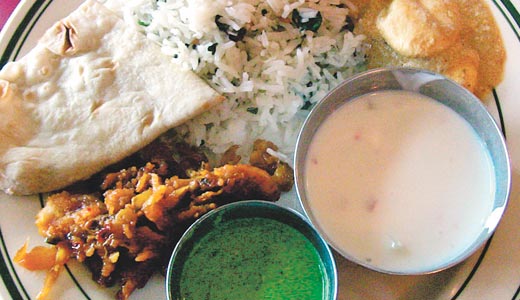 It’s holiday season, and I’m sitting over here making my list of a handful of restaurant and food reports that have piled up on my desk in recent weeks. There’s no naughtiness in my report: It’s all nice — and tasty, too.

For this week’s excursion, let’s have a quick look at Bombay Grill, yet another in the growing cadre of Indian restaurants, followed by a potpourri of other good things I’ve been eating recently (not including actual potpourri).

Harming no animals at Bombay Grill

If you’ll pardon a brief personal digression, I’ve been mournful lately following the loss of my beloved yellow cat Pepito, who died last month after a short, vicious bout with a virulent feline cancer. I held him in my arms and cried as the vet gave him the injection that eased his pain and took him from us way too soon. He was only 10.

To be frank, after having watched the light fade from the bright eyes of my best friend, I went through a period when I really didn’t feel right about making my meal on anything that had once been part of a living animal with a mommy and a face.

A vegetarian food critic? Appealing, but probably impractical in a general-audience newspaper, even one as eccentric as LEO Weekly. I’m adjusting to my grief now and have returned to an omnivorous diet, although with a lot more meatless meals and a strong preference for natural, humanely raised meat, poultry and fish when there’s animal protein on my plate.

During my brief vegetarian period, though, I spent a lot of time in Indian restaurants. Excepting a friendly nod toward Zen Garden’s vegetarian East Asian cuisine, it’s hard for me to imagine a more diverse, flavorful and hearty meatless bill of fare than the vegetarian cuisines of the Indian subcontinent.

Better yet, we’ve been enjoying a relative rush of new Indian places around the metro recently. And Bombay Grill, a particularly stylish new arrival in the Forum Center on Hurstbourne, offers an exceptionally fine and affordable ($7.99) lunch buffet.

I made three passes and managed a thoroughly satisfying meal on vegetarian options alone. Some highlights:

• Rice sticks, a salty appetizer that would make a great bar snack, are long, square and very crunchy.

• Uthappam is a small, pancake-like round of finely chopped carrots, green onions and other veggies.

• Masala dosa, delivered to the table, is a plate-size, crisp lentil pancake folded over a dab of spicy-hot potatoes with a bowl of sambar, a spicy reddish vegetarian soup intended for dipping.

• A vegetarian “cutlet” consisted of finely chopped bits of lentil, onion and other veggies, fried crunchy brown like a fritter.

• Malai paneer featured disks of mild white Indian yogurt cheese in a pale-tan sauce with a mild, elusive flavor. What is that? Cardamom? Ground nuts? Cashews, maybe? I doubt I could replicate it at home, but I love it here.

• Chili mushrooms, a mushroom and vegetable curry, is long-cooked and extremely hot. A good scoop of coconut rice made with coconut milk, cilantro and a warm but not fiery spice helped cool the fire, as did raitha, a classic Indian yogurt and cucumber side dish, paying homage to the reality that there’s nothing like dairy to douse a spicy fire.

Fiery and cooling green chutney and mild, sweet coconut chutney made fine accompaniments, as did naan, tender and wheaty Indian flatbread made in the tandoor oven.

With two salt lassis, the creamy Indian yogurt drink, lunch for two came to $26.40 plus a $5.60 tip. Even though it’s a buffet, the attentive, cordial and always smiling service earned a full 20-plus percent.

Bombay Grill also offers a full dinner menu at competitive prices, including vegetarian and meat dishes from all over India with a slight tilt toward Southern Indian specialties.

Mazzoni’s is gone, but the rolled oyster lives

With the regrettable closing of Mazzoni’s last month after 124 1/2 years in local business, Flabby’s Schnitzelburg in Germantown — under the same family ownership — is now the only place in the world where you can still munch on the original Mazzoni’s rolled oyster.

This Italian-style treat, a recipe that the Mazzoni family held secret through all those years, is a big, fried ovoid roughly the size of an elongated baseball. Inside, a steaming, tender dough made from the old family batter, called “pastinga” in the old country, looks like it’s made from white cornmeal, maybe. It cloaks at least four or five small, juicy and perfectly fresh shucked oysters and is armored in a crispy golden-brown breading.

Add a dash, or several, of spicy horseradish cocktail sauce from the squeeze bottle and you’ve got a traditional Louisville fried-oyster sandwich to be eaten out of hand. Flabby’s price for one: $3.90. Take two, they’re small. Well, they’re not. But they are good.

Roll out the (taco) wagon!

East Enders who’ve been jealous of their Buechel and Fern Creek neighbors over Las Gorditas, the Mexico City-style taco wagon that pulls up weekend evenings in the Eastland Shopping Center (LEO Weekly, May 28), can now relax: They have their own taco truck, Tacos Toreados, where the amiable proprietor Juan Deleon offers authentic delights served out the window of a wagon parked in front of Choi’s Asian Food Market in Lyndon.

We’ve been over a couple of times, and I can testify that the food is inexpensive ($1.50 for soft, Mexican-style tacos with a variety of fillings; $5 for torta sandwiches and so on).

Tacos Toreados is open 6 p.m.-midnight Tuesdays through Saturdays, 5-11 p.m. Sundays and closed Mondays. Cut them a little slack if they’re running late … this is a tiny, family operation.

Deleon says he hopes to stay open all winter if the weather’s not too bad, and he may set up a canopy with heaters. Me, I’ll load up and eat in the comfort of my car until spring gets here.

That’s not tuna. This is tuna.

In last week’s column, I kvetched about Napa River Grill overcooking its tuna, something I didn’t expect a fine, upscale eatery to do. This week, I visited Meridian Café, one of my favorite casual lunch spots, and found an awesome new tuna dish on the menu. They cook it right, and they call it, koinkidentally, the “Napa tuna sandwich.”

Chef Mike Ross mounts nicely seared tuna with a bright-pink interior on grilled brioche, dressed with Bibb lettuce and avocado and a hot-sweet chili sauce. It’s $9.25. I like! (Actually, I like just about everything at Meridian Café, where Ross’s eclectic and affordable bill of fare offers winning options for both breakfast and lunch.)