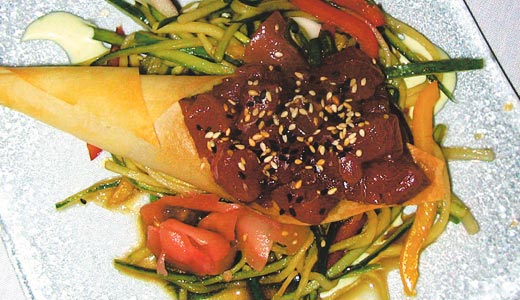 The landscape of Louisville restaurant history is littered with the dry bones of eateries whose owners thought it would be a really good idea to move to a new location and expand to a larger space.

The most recent victim, Mazzoni’s, fell just one year short of celebrating its 125th birthday. The home of the “rolled” oyster, it had survived several moves over the years before landing on Taylorsville Road in the 1980s. A move to shopping-center quarters in Middletown last year proved its undoing.

Similar fates befell Greek Paradise, which moved from a small, homey spot near Radcliff, Ky., to a hulking hall in Butchertown that proved more than it could handle; Hoosier standard Frank’s Steak House when it expanded into larger quarters in Louisville; and the last owners of Lentini’s, whose aggressive expansion plan yielded three eateries that all shut down fast.

Napa River Grill seems to be breaking the spell. This popular spot had built a loyal following over nearly a decade in the St. Matthews space originally built for Mamma Grisanti’s.

In June, Napa moved over to Westport Village, and by all accounts, managed to retain its loyal clientele and attract a new following. Laughing in the face of recessionary doom, it has been serving full houses since opening night.

Recently I enjoyed a lunch with wine-industry associates in the bar, and a few days later, friends Todd and Fran joined my wife Mary and me for a Saturday night feast.

Both occasions proved satisfying, with Napa scoring well in food, mood and service, a bit less so for the sheer volume of its crowded venue.

If consistency is a virtue, Napa scores, managing in the multiple rooms of the larger new facility to remain rooted in the same California wine-country style that informed the original.

They have replicated the live grapevines that surround a comfortable patio (not in use on the chilly evening of our visit, despite the built-in fire pits in the outdoor tables). The decor, as before, features wine-country art on walls in bold colors that might well be described as “Chardonnay” and “Pinot Noir.”

About a dozen starters, soups and salads range in price from $4.95 (for a Napa house salad) to $13.95 (for my appetizer choice, Ahi Cornucopia, about which more anon).

There are 16 entrée selections, at tolls from $12.95 (for a ground-to-order rib eye cheeseburger) to $38.95 (for the rancher’s aged rib eye, a marbled, USDA Prime piece of bone-in beef that weighs a full 22 ounces, enough for two to share).

Most of the main courses fall in the $20 range, with seafood, chicken and pork significantly outnumbering red-meat dishes. Vegetarians will find just one meatless dish on the bill of fare, but it’s an artful treat: baked squash ratatouille ($15.95), a spaghetti squash serving as edible bowl for a roasted vegetable, tomato sauce and cheese ratatouille.

On my lunch visit, the menu description lured me toward the Half Moon Bay tuna salad ($10.25) with its talk of fresh-grilled chopped ahi tuna served over Bibb lettuce. I assumed they were offering sushi-style ahi here. Wrong-o, bucko. This tuna was cooked all the way through and shredded fine, covered with a creamy, mustardy dressing. OK, it wasn’t bad. I ate it all. But it seemed like a waste of good ahi to turn it into tuna-fish salad, even such an excellent tuna-fish salad.

For a better take on ahi, I recommend the aforementioned Ahi Cornucopia. This is tuna. A generous ration of sweet, fresh sushi-raw ahi dice was poked into an ice-cream cone of crisp-fried wonton pastry, sprinkled with black and white sesame seeds, and plated atop a bed of julienned vegetables dressed in a delicious Asian vinaigrette redolent of sesame and wasabi.

I chose fish for my main course, too, the popular Ménage à Trois ($29.95). Three smallish squares of sea bass, salmon and ahi tuna were lined up on a long, rectangular plate, each plated with a different base, sauce and toppings. The sea bass, pure white and sweet, was flavored with a honey miso dressing and placed on jasmine rice. The salmon was dressed with a thick, tart-sweet pomegranate sauce and garnished with julienned snow peas, plated on a creamy goat-cheese polenta. The ahi was overcooked, prompting me to make a mental note to order my tuna sushi-style when I dine here again. It was topped with crispy rice noodles and plated on sliced shiitake mushrooms, red bell peppers and red onion. It was an artful display and I enjoyed it, though I would have been just as happy with a little more elegant simplicity … there was an awful lot happening on that plate.

Todd chose the ancho calamari appetizer ($8.95), a huge plate of breaded and fried calamari dredged in ancho chile pepper. Delicious and perfectly prepared, not the least rubbery, but the ancho flavor was subtle at best.

He praised the cast iron sirloin ($22.95), a massive sirloin (he guessed 14 ounces) prepared exactly medium-rare as requested. “It was tender, tasty, but could have been a bit more crusty on the outside for my tastes,” he said. It was accompanied by Boursin cheese au gratin potatoes and a vegetable side.

Fran started with an appetizer order of short ribs ($12.95) on a crimini mushroom risotto with braised red cabbage and a Port wine demiglace. She loved the ribs, which were meaty and flavorful, a generous appetizer portion sufficient for an entree.

Her entree, Asian sea bass ($25.95), was not one of the more successful efforts of the evening. She judged it overcooked, and it was a thin slice, not the usual large flaky fillet we have come to expect when we see sea bass on the menu. The honey miso glaze was very sweet, more than expected.

Mary started with a spectacular looking appetizer, a cup of “house-made” tomato soup ($6.95) covered with a golden-brown dome of baked puff pastry. The soup was enriched with plenty of cream, but she thought the soup “run of the mill,” heightened by the fun of the puff pastry.

Her main course, Soda Canyon braised beef chuck roast ($17.95), was a massive hunk of beef under a savory Cabernet brown gravy, sufficient to bring enough leftovers home to make dinners for two. Roasted garlic mashed potatoes were piped in a beehive shape; she declared the vegetable sides of peas, baby carrots and pearl onions “decor only.”

We chose a good white and a good red wine from the lower end of the mostly-California wine list: Ferrari-Carano Fumé Blanc ($32) and Chalone Pinot Noir ($35).

Ambience on a very busy Saturday night was, as Todd put it, “Loud, loud, loud.” Lots of folks from the U of L football game, and I didn’t expect (or wish) to see sweatshirts in the dining room. The windowless room we were in was overcrowded and boring in terms of the table settings and overall feeling. In short, more than acceptable food and service, but ambience was a negative for us.