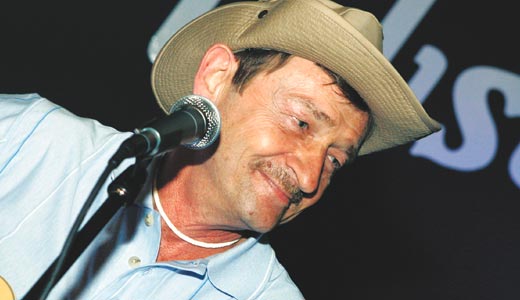 Larry Pierce hasn’t settled on a title for his next album, due in the spring, but he’s kicking around some ideas. “I’m thinking Dirty-Minded Bastard or Sick-Minded Bastard,” he says.

Either would fit: Since 1993, Pierce, a retired auto parts factory worker from Middletown, Ind., has toured the nation playing “dirty country.” Now, his fame is sure to escalate thanks to a new documentary that screens Thursday at the BBC Taproom.

Pierce learned to play guitar listening to The Beatles but picked up country playing bars in Missouri because that’s what the customers wanted to hear. He wrote his bluest material entertaining friends at his house. “It was totally by accident,” he says. “Pretty soon, that’s all I was doing.”

His music caught the ear of a Las Vegas production company, Laughing Hyena, which elevated Pierce’s popularity somewhat. But it was the Colorado Springs band Itis that helped turn Pierce into a working musician.

Unbeknownst to Pierce, Itis picked up one of his cassettes at a truckstop and liked it so much they covered his songs at their shows for three years. They back Pierce on the road when logistics permit. “We do have a bit of a distance problem,” he says.

In 2003, Prueher and Pickett contacted Pierce about making the documentary, but the star didn’t consider himself celluloid material.

“They wrote me a letter, and I wrote back saying, ‘Sorry, there’s no story here. This is not what you think. I’m married with children,’” says Pierce, who has a wife of 27 years. “They said, ‘That’s even better.’”

For his part, Pierce never has been sued, and he’s never had a problem being booked anywhere. “There’re a lot more dirty-minded people out there than I thought there were. I’ve had a few complaints, but most of the time it goes over really well,” says Pierce, and for one good reason:

“Everybody likes sex. There are some people who don’t talk about it a whole lot. They sure don’t sing it.”

“Dirty Country” screens at 8 p.m. Thursday in the warehouse of BBC Taproom on the corner of Main and Clay streets. Pierce performs a special acoustic set. Admission is $8 for Louisville Film Society members and $10 for non-members. A trailer is available at www.dirtycountrymovie.com.

The Rhumb Line is a nautical term for a line that passes through all meridians in one direction. It’s also the critically acclaimed album from Massachusetts ensemble Ra Ra Riot, who play the 930 Listening Room (930 Mary St., 635-2554) on Thursday. So Many Dynamos and Princeton open. Doors are at 7 p.m. Advance tickets for the all-ages show are $8, $10 at the door.

The Rhumb Line has an air of loss due to the untimely drowning of former drummer John Ryan Pike. “We tried to celebrate John and do what John would’ve wanted,” says Alexandra Lawn. But the record has broader messages, too. “The album’s not necessarily about him, but life and the juxtaposition of happiness and sadness.”