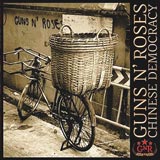 First off, this album is a sad, sad jumble of everything bad that has happened in hard rock over the past 17 years. I originally wanted to end my review there, as it explains everything more fully than any “explanation” ever could.

Axl Rose (the only original member at this point) has spent the better part of the last two decades holed up in a long list of studios, with a veritable army of hired “Guns,” apparently trying to out-Axl himself.

The guitars screech and moan, but they have no soul. They’re so overcompressed, you’d be hard-pressed to determine whether they were guitars, at some point, or just made-up Pro Tools trickery. The song arrangements themselves seem to have taken an “everything and the kitchen sink” approach. Almost every song has a quiet part, a rocking part, a part where Axl gets to screech, some piano tomfoolery … you get the point. It’s like someone ate both Use Your Illusions, chased it with Nine Inch Nails’ Downward Spiral and crapped it all out in CD form.

Honestly, none of this comes as any surprise. Once the calendar rolled over to the 21st century, this album never really had a shot at being any more than a complete train wreck. I can’t recommend buying it, but I reckon everyone needs to hear it, at least so that they can attest to how terrible it is.