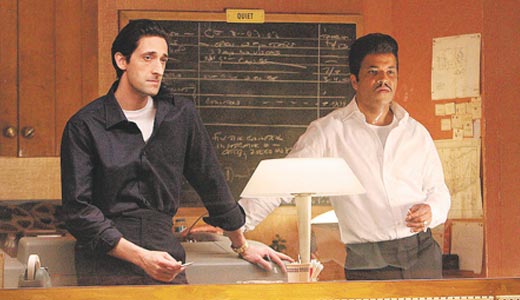 “Cadillac Records” was about as interesting as pausing on the History Channel for a few moments during a nice channel surf. “What a great tidbit of history,” I thought while watching the Darnell Martin-directed film. “It’s all very fascinating … but I wonder what’s on VH1 right now. Click.”

“Cadillac Records” lacks a centrally focused figure, and could use a little more “Ray” or “Walk the Line.” Chicago’s Chess Records in the 1950s is certainly worthy subject matter of a feature-length film. And the actors here, for the most part, are wonderfully cast as the era’s top R&B performers: Muddy Waters, Little Walter, Etta James, Chuck Berry.

The focus on founder Leonard Chess (Adrien Brody), the successful yet flawed businessman behind the label, should’ve been key. But as we were introduced to each artist Chess signed, we were also enveloped in their individual struggles, and the film lost its path.

“Cadillac Records” is narrated by songwriter Willie Dixon (Cedric the Entertainer), who looks back on the time period with a present-day perspective. “We made the kind of music that could transform into anything,” he says.

The film shows Chess as a struggling Polish immigrant in Chicago trying to make his name — in those times, you had a name if you had a Cadillac. Chess opened a blues club in a black neighborhood and soon discovered a new kind of music bubbling up from the South. A chance meeting between Muddy Waters, a former field worker from Mississippi, and Chess led to a partnership that involved peddling records out the back of his Cadillac throughout the South to DJs who promised to play the music, sometimes by payola. The Chicago club burned down, which led to the birth of Chess Records, at 2120 S. Michigan Ave.

While Waters was the first breakout star Chess produced, others came through the revolving door. Little Anthony (Columbus Short), Chuck Berry (Mos Def), Howlin’ Wolf (Eamonn Walker) and Etta James (Beyonce Knowles) all were propelled to the top of the charts with the help of Chess, who paid his artists on a need-to basis and handed out Cadillacs like bonuses.

As a side note, the film touches on how prevalent piracy was at the time, recounting Berry’s successful lawsuit against The Beach Boys for “Surfin’ U.S.A.,” which blatantly ripped off his melody in “Sweet Little Sixteen.”

Mos Def and Beyonce plucked the brightest notes in a film. Brody’s Chess, however, was a mystery. Is this man a hero who deserves a place in music history, or was he a shrewd pimp of artists who didn’t know any better?