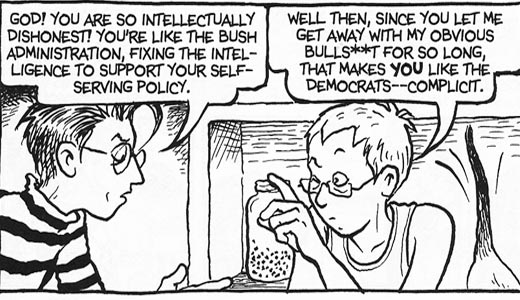 The Essential Dykes to Watch Out For

Two years ago, Alison Bechdel unexpectedly rose to fame with her graphic memoir “Fun Home.” Each square inch of that outrageously addictive book showed the kind of meticulous attention to detail that ought to make most memoirists want to retire their keyboards and hard drives.

But to certain readers of the alternative press, the author did not appear out of nowhere with her story of growing up in a funeral home presided over by a closeted gay father. Bechdel’s name had, in fact, been a staple since the early 1980s, when her comic strip “Dykes to Watch Out For” began appearing in lesbian and gay alternative weekly newspapers.

The bad news is that Bechdel, after 25 years, has for now put the comic strip on hold. The good news is that, just in time for the alt person on your holiday list, the best of the best of these books has been collected in the new “Essential Dykes to Watch Out For.”

Readers familiar only with “Fun Home” will instantly recognize Bechdel’s style, but they may be caught off guard both by how funny and soap-operatically compelling “Dykes” is. The author herself describes the ongoing strip as “half op-ed column and half endless, serialized Victorian novel.” Reviewers have tended to compare her work with the cartooning of Lynda Barry or “Doonesbury,” as the series follows the life stories of a core group of lesbians, their friends and family members. But in flavor and sensibility, “Dykes” is actually much closer to Armistead Maupin’s “Tales of the City” series, only with in-jokes about academia instead of San Francisco and Hollywood. And in case you’re wondering, these lesbians are by no means glorified. They’re shown in all of their gritty humanity.

The central character, Mo — clearly a stand-in for Bechdel herself — is an obsessive activist and news junkie; Lois is addicted to sex; Sydney is a narcissistic intellectual with credit problems; Clarice and Toni struggle (and struggle and struggle) to keep a dying relationship alive. As the decades pass, the community grows and is supported by an extended cast of friends, children and pets — to the point that even the novice reader of the comic strip begins to understand how Bechdel’s work not only illuminated but actually shaped lesbian culture from the beginning of gay liberation.