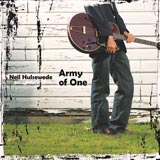 One unfortunate result of the alt-country boom has been that anyone with an acoustic guitar and a passable Jim James bleat can take up the mantle of "earnest troubadour" without having much feel for the music itself. But Louisville’s Neil Hulsewede is not kidding about his country cred: His solo debut Army of One is a hearty helping of straight-up honky tonk, presented tastefully and with little fuss.

There’s nothing “alt” about it — no self-mythologizing, no unearned world-weariness, no “next Gram Parsons” posturing — just plenty of tales of drinkin’, cheatin’ and ramblin’, buoyed by ample doses of pedal steel, chicken pickin’ and weepy fiddle. Hulsewede’s commitment to his craft means Army of One can sound a bit samey in parts, but the brisk 36-minute running time keeps the album light on its feet, and Hulsewede manages to show some range in the ’70s singer-songwriter touches of “It Keeps Getting Better” and the eerie, nocturnal folk of “Heading Out for Nowhere.” Army of One hardly reinvents the wheel, but its utter lack of pretense is refreshing enough in itself.