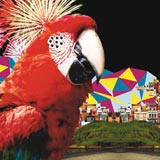 El Guincho’s Pablo Díaz-Reixa should throw the next Derby Eve Bash. Top to bottom, Alegranza, named after an uninhabited island off the coasts of Spain and Africa, overflows with the influence of two magnetic cultures.

Diaz-Reixa, a former athlete and member of the group Coconut, is a sampling nerd, but the kind of nerd whose obsession is to move hips, with layered percussion by the truckload, a la Paul Simon’s “Rhythm of the Saints.”

Guincho keeps the words at a minimum here, unless it’s a rallying chant (“Fata Morgana”), choosing to focus on joyful tones above masterful calypso, traditional African, dancehall and Latin rhythms. Suck some of the stiffness out of Girl Talk’s samples and you’re in the ballpark.

With its themes of inclusion and celebration, El Guincho’s robust mix of Tropicalia and calypso might help world music gain a greater foothold in the Midwest.