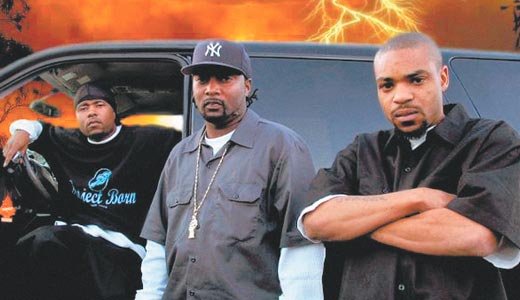 Wasn’t that the part of Christmas the Grinch hated most? As usual, the week leading up to the holiday is a bit thin with concerts, but some musicians offer relief from the typical, commercialized seasonal blare. The return of California acoustic guitarist and singer John McCormick sets up the perfect antidote to playing demolition derby in mall parking lots.
McCormick, who comes to the area every once in a while to visit family in New Albany, first drew audiences for his sparkling Celtic interpretations. McCormick says that, at his return to The Rudyard Kipling (422 W. Oak St., 636-1311) Friday night, we can expect a few surprises.

“I’ve just found out over the years that I just didn’t want to be stuck in a mold, because there’s just so much good music.” He’s promising “a lot of songs I haven’t sung in Louisville before” and talks about inspiration from figures like Nick Drake and Leo Kottke, which may indicate the direction for Friday’s set. Then he drops another clue: “… more 1970s than 1770s.”

The mention of Kottke is a reminder that McCormick is among the top ranks of master guitarists. “When I do an album, it’s got to be perfect,” he says, though he enjoys the easy intimacy of house concerts. He also loves sharing his artisan’s gifts with others: He’s part of a musician’s co-op called The Acoustic Vortex (from Northern California, but couldn’t you guess that from the name?), whose members regularly play pro bono at prisons and hospitals.

Thursday, Dec. 18
A very different experience is available at Jim Porter’s (2345 Lexington Road, 452-9531) on Thursday. Instead of a single acoustic guitar master giving respite from overplayed carols, there’ll be some classic showbiz fun courtesy of two rather popular icons: Santa Claus and Elvis Presley. It’s all part of the musical spectacle “Blue Christmas — A Holiday Tribute to the King.” Southern Indiana native Robert Shaw has brought his series of “Celebrating Elvis” tribute shows around the country, and this is the first time he’s come home with the holiday version. You’ll get the song list you’d expect — carols the King made his own, plus the signature hits. What you might not have figured on, though, is the personnel who’ll be part of Shaw’s Lonely Street Band; players from Juggernaut Jug Band, Bodeco and none other than Todd Hildreth on keyboards. The show starts at 8 p.m., tickets are $25, and more info is at www.celebratingelvis.com.

Saturday, Dec. 20
Do you prefer to go to extremes? Rap group Project Born started out as protégés of Insane Clown Posse in the mid-’90s. They recorded their highly regarded Born Dead on ICP’s Psychopathic Records label but were soon out on their own.

Since then, they’ve stayed true to a potent underground style — a bit of thug, some other ominous shades and cautionary tales — with occasional discs getting out through a minefield of recording industry hassles. As just one example, this Flint, Mich., trio is only now concluding a months-long struggle to release Born Dead 2. To mark the occasion, Frank Nitty, Half Pint and Li’l Polk Born have hit the road for their second major tour of the year, which stops at Headliners (1386 Lexington Road, 584-8088) Saturday. The night is a package deal with B-Cide and several other acts. It’s labeled “Christmas Massacre” but is also reputedly a birthday celebration for Nitty (who’s originally from Elizabethtown). Tickets are $15, and doors open at 6 p.m.

Saturday, Dec. 20
If you believe Leslie Dysinger’s press bio, the Nashville-based folk-rocker is what you might have expected to hear had the late Janis Joplin gone country. (That’s actually kind of intriguing, so kudos to her PR flacks for coming up with that nugget.) In truth, Dysinger is a veteran rocker who has been playing in bands off and on since the early 1990s. Along the way, she migrated to Memphis and back, and in recent years has focused on honing her chops. The result is her debut solo record Cause & Effect, which offers up poignant and straightforward storytelling. Her tour in support of said album brings her to The Rud this Saturday, along with Louisville singer-songwriters Brandon Britton and Lauren Conkin. Showtime is 7 p.m., door is $5. —Kevin Gibson