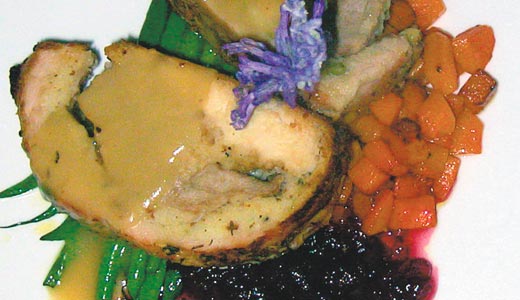 If you’ve never heard of the wondrous holiday bird called turducken, you just haven’t been paying attention. If you’ve ever seen and actually tasted one, you fall into a much more exalted category, as this Cajun feast is so difficult to prepare that it’s almost as rare as the dodo bird.

Purportedly the invention of Paul Prudhomme, the rotund chef at K-Paul’s Louisiana Kitchen in New Orleans, the turducken is a combination of a partially deboned turkey that’s been stuffed with a deboned duck, stuffed in turn with a deboned chicken. Spicy Cajun stuffing is piped into the inner spaces like tasty grout; the hulking combination is roasted, sliced crosswise into impressive rounds, and served with a spicy Cajun sauce.

Prudhomme claims that he dreamed up the idea as a way to bulk up a turkey for a holiday buffet back in the ’60s. Some in Acadiana dispute this tale, arguing that the celebrity chef merely adopted an old Cajun tradition. Prudhomme, in a canny defense, has trademarked the name.

Whatever. Making turducken is an all-day project, a culinary rarity that’s seldom seen outside South Louisiana, although the truly obsessed may purchase one on the Internet for home cooking.

Recently, however, turducken has been almost as commonplace at Louisville’s Varanese restaurant as, well, pecan-encrusted mahi-mahi or grilled salmon smothered in a caramelized mandarin orange sauce. Chef John Varanese has come up with a downsized, simplified version that can be made in small packages practical for service as a nightly special.

He offered it on a whim one night last month, repeated it at a wine-tasting dinner, and it achieved such acclaim that he put it on as a special for an entire weekend. Chances are he’ll offer it again during the holidays — call the restaurant at 899-9904 for information.

I’m a serious aficionado of Acadian cuisine and have spent quite a few hours behind a stove whipping up such goodies as gumbo, jambalaya and etouffée. But turducken had never passed my lips, and if I had to make one myself, it wasn’t likely to do so. So when I heard about Varanese’s special, I was there.

It was my first return to this popular Clifton spot since my Sept. 14, 2007, review, and it seems to be going strong. Its artful stone “water wall” and curved bank of floor-to-ceiling windows frame a stunning venue, and I think they may have crammed in a few more tables to accommodate a strong and loyal clientele.

We started with a table full of shared appetizers: Crispy fried calamari and peppers ($8) were crusty and flavorful, with sweet chili sauce and Japanese ponzu for dipping; duck rangoons ($6), a daily special, were deep-fried four-pointed stars the size of ping-pong balls, stuffed with molten cream cheese and shredded duck, perched on a small bed of gai lan, Chinese broccoli; and a ball of mild goat cheese crusted with chopped pistachios was served on a baby-spinach salad ($7) with a subtle tomato-balsamic vinaigrette.

But we came for the turducken, and it proved worth the wait. A Thanksgiving dinner on a plate, Varanese’s version ($22) simplifies the Cajun theme by replacing whole birds with boneless cutlets. Turkey, duck and chicken were rolled together rouladen-style with a spicy white-cornbread dressing and dusted with herbs; roasted, sliced into rounds and topped with a clear duck velouté that comes out a great deal like the smoothest, most elegant Thanksgiving giblet gravy you’ve ever tasted. Two inch-thick rounds were plated atop diced butternut squash; tart-sweet cranberry chutney, and pencil-thin, barely cooked green beans.

Artesa 2006 Pinot Noir seemed a little spendy at $58 for a wine with a suggested retail price around $20, but it’s a good, food-friendly Pinot with fresh cherry flavors.

Too full for dessert, we settled up for $107.06 (more than half of that for the wine), added a $22.94 tip and toddled out into the chilly evening, turducken virgins no more.